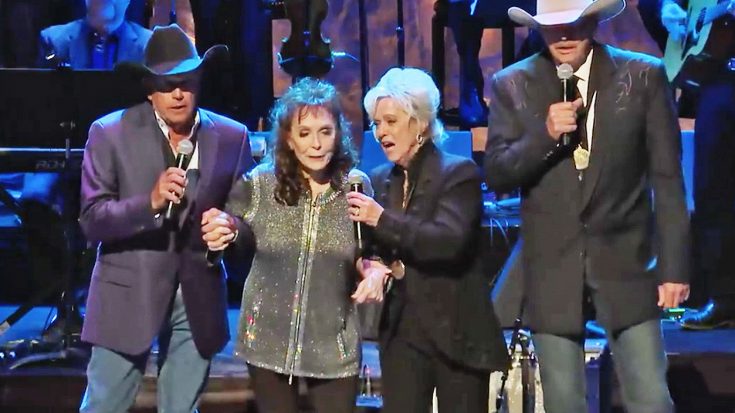 In celebration of his induction into the Country Music Hall of Fame, some of the biggest names the genre has ever seen came out to welcome Alan Jackson into the prestigious organization.

Loretta Lynn made her return to the historic stage following a massive stroke back in May to participate in his induction, a highlight of the night coming when the Leading Lady of Country took the stage with Jackson and fellow Hall of Famers George Strait and Connie Smith for an unforgettable performance of 1907 hymn, “Will the Circle Be Unbroken.”

The four iconic artists who represent two different time periods of the historic genre – traditional and classic – of music stood side-by-side, their legendary voices melding eloquently throughout. Prior to their performance, Lynn stood alone at the podium to honor the man of the hour.

“He looked like a scared little boy. He was practicing backstage, going through his songs, and I remember I looked at him and I said ‘You’re going to be one of the greatest singers in country music.” Lynn recalls telling a nervous young Jackson decades prior to his induction. “He hasn’t let me down.”

59-year-old Jackson remains one of the most successful solo artists in the genre, selling nearly 45 million albums in the United States alone and charting 26 singles at the top of Billboard‘s country charts.

You can watch the performance of “Will the Circle Be Unbroken” below.

Stars Sing "Will the Circle Be Unbroken"

This is epic! George Strait, Alan Jackson, Loretta Lynn, and Connie Smith sing "Will the Circle Be Unbroken."