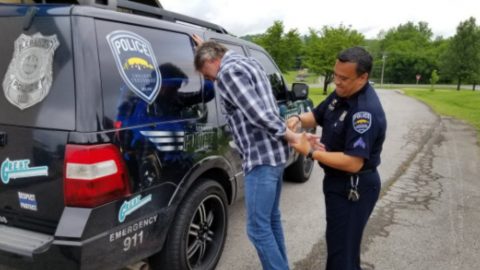 Country star Darryl Worley was handcuffed by authorities on Friday, but it’s not quite what you think. Worley was part of an end-of-year school project at Friendship Christian Academy in Lebanon, Tennessee, called “CSI: Case of the Missing Cupcakes.”

Worley was a suspect in the project in which fifth and sixth graders have to figure out who stole the class’s cupcakes by sifting through evidence, evaluating a crime scene, and eliminating other suspects.

Eventually Worley was caught after students discovered a pair of cowboy boots, a paper with song lyrics on it, fingerprints, hair samples, and a Darryl Worley guitar pick at the crime scene.

Worley was “arrested” then later released and allowed to rejoin the students. The “Have You Forgotten” singer shared details of his exciting day on social media including photos of his so-called arrest.

‘My mugshot! Thanks to @NC5 for coming out to Friendship Christian School to cover my arrest! Making learning fun! #donttouchthecupcakes pic.twitter.com/qgf4Eqcmpd

Worley said he was happy to be at the school to help the students in their project and help the students learn about how police conduct their investigations, and others involved with the project said that Worley was a good sport.