Dale Jr. Details Heartbreaking Tradition He Carried On From His Father 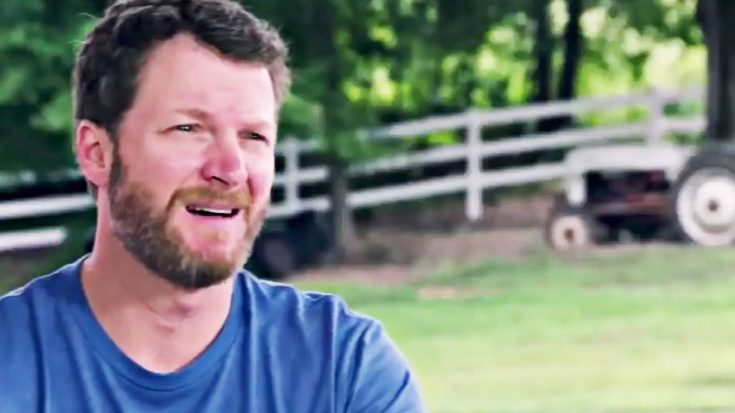 The only superstition this popular NASCAR driver has ever held has a tear-jerking story behind it – one that longtime Dale Earnhardt fans will likely remember hearing years ago.

Dale Earnhardt Jr., his wife Amy, and several longtime friends from NASCAR sat down with Fox Sports in a heartbreaking and emotional video that explains why he holds this single superstition – and exactly what it means to him.

Years ago, when his father, Dale Sr., was competing with his friend Darrell Waltrip, he noticed that Waltrip’s wife, Stevie, was putting an index card with a Bible verse on it inside her husband’s car. As Stevie explains, she gave them to him for inspiration.

“When we got finished praying, she handed me my scripture on the note card,” Darrell Waltrip said. “And Dale being Dale, grabbed it out of her hand and said, ‘What’s this?’ And Stevie said, ‘Well it’s the scripture I put in DW’s car.’”

“And he said, ‘Well where’s mine?’” Stevie continued with the story. “I got grey tape and wrote it on a roll of grey tape and then tore it off and gave it to Dale to put in his car.”

It was this bond between Waltrip and Dale Sr. that kept them such close friends for so many years. The Waltrips regarded Dale as one of their closest friends, and he came to expect a scripture from Stevie in his car at every race – something she gladly did for him. Ever since that very first day, Dale Sr. had Stevie write him a scripture until the day he passed away in 2001 at the Daytona 500.

After his father’s tragic death, Dale Jr. revealed that he “was needing some looking after” and that’s when Stevie came to him.

“I was needing some looking after, and I think that it also maybe was healing for Stevie, losing my dad as a friend. Stevie’s like, ‘I would like to continue to give it to you, if that’s OK.’ And I’m like, ‘Absolutely.’”

This bond between the Waltrip and Earnhardt families has continued ever since and Dale Jr. will keep these verses with him during every race – because of how strong it has impacted him.

“I don’t have anything that I do on race day that I’m superstitious about, that has to happen, except for the scripture,” Dale Jr. revealed.“It gives you some strength, some emotional, mental strength. I don’t feel safe without it.”

Now, often you will find many of Dale Jr.’s race scriptures adorning social media because his loving wife, Amy, likes to share photos of them with fans in hopes they will provide the same feelings of safety for others.

Watch the incredible story of Dale Jr.’s only superstition and hear the Waltrips reminisce on times with one of their closest friends in the video below.