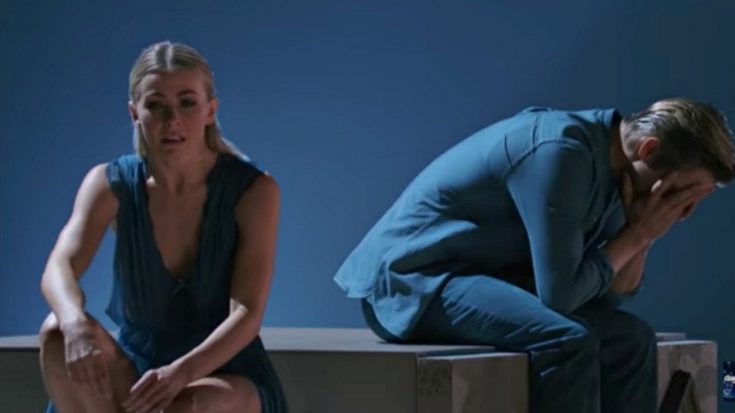 Derek Hough returned to his old ‘Dancing With the Stars’ stomping grounds back in 2017 where he joined his sister, Julianne Hough, for an emotional dance reflecting on one of the most painful moments of their childhood.

The captivating routine, performed to “Unsteady” by the X Ambassadors, told the heartbreaking story of being torn apart by their parents’ divorce. The impressive set and stunning choreography drew the audience in as the siblings openly shared what it was like for them to watch their parents’ marriage come to an end.

Julianne, who was only 9 years old at the time of her parents’ divorce, lived with her mother while Derek, who was 12, lived with his dad. Roughly one year later, the siblings were sent to London to attend dance school. Each of these events was flawlessly portrayed in Monday night’s dance.

The routine starts by showing a woman handing divorce papers to her husband. As two children representing younger versions of Derek and Julianne tug at each parent, the Hough siblings reenact the emotions they went through as children, being heartbroken and torn between their mom and dad.

As the routine moves on, the bond between Derek and Julianne gets visibly stronger and the audience sees that in the midst of their heartbreak the two depended on each other.

After the dance, Derek and Julianne spoke with host Tom Bergeron about the routine.

“It’s good therapy, it’s beautiful,” Julianne said. “That’s what’s so amazing about dance, is being able to express that and have moments like this with our mom in the audience.”

Hough later took to Instagram to address the dance.

“This piece was so much more than a dance. It was an opportunity for us to express our most vulnerable parts of who we are,” Julianne wrote. “As adults, we are now able to connect and understand what we couldn’t as kids.”

Part 1 ?? This piece was so much more than a dance. It was an opportunity for us to express our most vulnerable parts of who we are in our most safe environment through movement! I know we aren't alone in this subject matter and want everyone out there to know that no matter what has gone on or is going on at the moment in your life that is hard, you must hold on to the people that are there for you always and know that in time everything will work out how it's supposed to and for the best. As adults we are now able to connect and understand what we couldn't as kids. We are so grateful for our family for allowing us to open up and expose our vulnerabilities through art so that others may be moved and inspired to hold on! Thank you @dancingabc for giving us the space to create and be free to be us. And everyone in production that helped bring this scene to life. You know who you are! @nappytabs for your constant overachieving… And of course, @tessandrachavez and @kyleHanagami thank you for your thoughtfulness in helping us create our vision of our story. This night was just a taste of what you will see on our tour MOVE BEYOND. We leave in just over a week to open in Akron Ohio on April 19th! Come experience the show with us and of course we love Connecting and meeting everyone from all over the country. ?? Go to www.moveliveontour.com for tickets and VIP packages. #movebeyond #moveliveontour ?? Love you all so much. Thanks for always being there for us to hold on to as well! ??? oh and I love you too bro @derekhough ?

Watch the emotional dance routine from Derek and Julianne Hough in the video below.