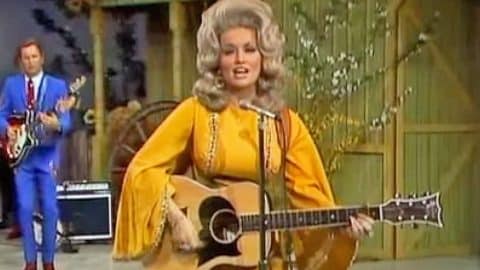 When you hear the name Dolly Parton in the year 2021, you think of her flashy outfits, big hair, and legendary five-decade spanning career.

In 1967, when you heard the name Dolly Parton, you think of the nice young girl who appears with Porter Wagoner.

Some memories you never forget 🤗

By 1971, Parton was making a name for herself as a solo artist. Although Parton had released several solo albums prior to 1971, she really rose to fame when her album Joshua debuted due to the success of the title track.

The song “Joshua” was Parton’s first number one song on the Billboard country charts and paved the way for her to become the legendary singer she is today.

Let my song carry me all the way home 🎸 🎻

Parton sings about an adventurous young girl who dares to visit a “rundown shack” in her small hometown where a mean man lives. She had heard many stories about him and his property and wanted to see for herself if everything was true.

She and the man, Joshua, began talking and became extremely close. He had no one to share his life with and neither did she. They talked for hours and hours and “couldn’t help but fall in love.”

Parton’s performance of this upbeat tune really shows off her bubbly personality. She even included her signature high-pitched laugh in the middle of the song. No wonder the world fell in love with her!

Watch her perform “Joshua” below.