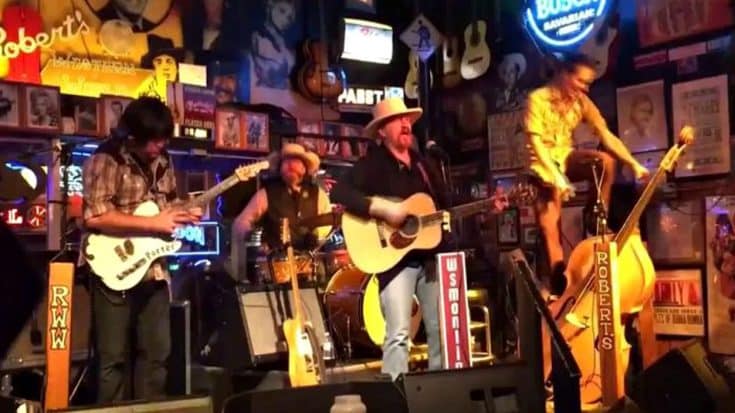 Some pretty fascinating videos have come our way, but few compare to the one below. The video was filmed at Robert’s Western World on Lower Broadway in Nashville, a place that is credited for reviving Lower Broadway after The Ryman Auditorium closed its doors and the Opry moved to a new location.

The Don Kelley Band was on stage Friday night (January 29), something they’ve been doing for more than 30 years. But, fans had the opportunity to witness something they’d never seen from the band before. Don Kelley and his crew was delivering a dynamic finish to the classic song “Ghost Riders In The Sky” when drummer Stan Saxon stands up, loses his balance, and falls through the window behind him.

“The guy landed on me and another couple with his snare drum on the sidewalk,” bystander Patrick Harrigan told Saving Country Music. “Broken glass everywhere. Crazy.”

Stan Saxon suffered a rib injury, but went on to play another four hour set on another stage across the road.

Saxon’s epic (and frightening) fall was captured on tape. Check it out below!