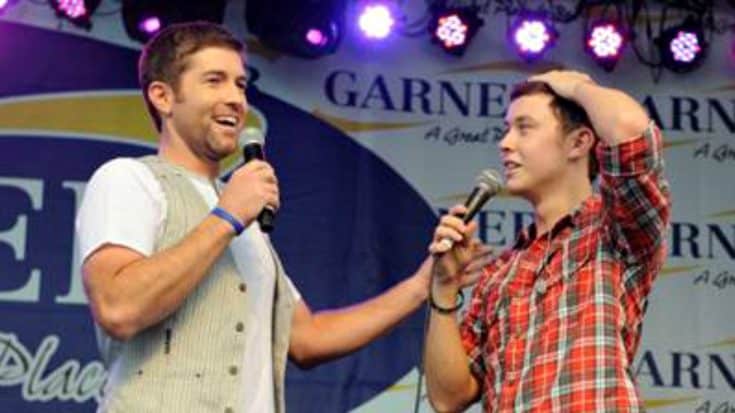 2011 was a huge year for Scotty McCreery. The North Carolina native, and then-high school student, saw his life change through as he auditioned for and eventually won American Idol. One of the highlights of his American Idol journey occurred when he became one of the final three remaining contestants during the show’s tenth season. Part of being a finalist included a hometown visit. During these visits, the finalists would perform a concert for the community that gave them their start, all the while being followed by cameras.

During Scotty McCreery’s hometown concert in Garner, North Carolina, one very special guest made an appearance and surprised the singer. Country star Josh Turner surprised McCreery in front of more than 30,000 of his hometown fans as he was singing Turner’s song ‘Your Man.’

“I think he was surprised,” Turner said of McCreery’s reaction. “He didn’t see me until we were almost face-to-face. I think I almost gave him a heart attack.”

McCreery, 17-years old at the time, sang Turner’s ‘Your Man’ during his Idol audition in Milwaukee, Wisconsin. The performance earned him a ticket to Hollywood where the teen would go on to win the coveted title of American Idol.

Watch Scotty McCreery’s epic reaction to Josh Turner’s surprise in the video below.