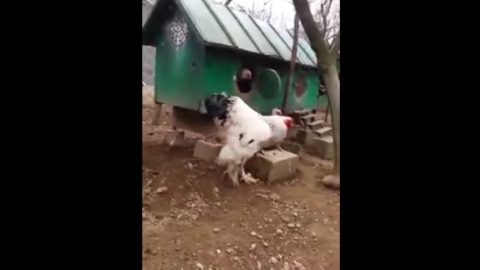 Known as the King of Poultry, Brahma chickens are the largest chicken species in the world. Not only are they large, but some of them can grow up to be the things of nightmares. If you don’t believe us, maybe the recently released footage of Big Boss, a Brahma chicken from Kosovo, will convince you.

In a video posted to social media on Saturday (March 18), the freakishly large rooster is seen making its way out of a chicken house. In less than 24 hours the video has garnered 55 million views and more than 1.5 million shares on Facebook. We can’t argue with Big Boss’s fame, though. We’re as mesmerized by him as the rest of the country and can’t stop watching.

Big Boss’s internet debut lit up social media leaving some to question whether or not he was the real deal.

It’s a man in a chicken suit…I hope ⚡️ “If you’ve never seen a Brahma chicken, prepare to trip out”https://t.co/Xeqfn77BNl

Check out the video that everyone’s talking about below and let us know what you think of Big Boss!