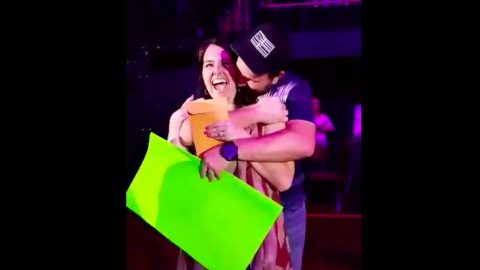 It was a night to remember for Wesley and Katy Hansen when Garth Brooks stopped his concert at the Forum in Los Angeles to reveal the sex of their unborn baby.

In true Garth style, the record shattering artist brought the Hansen’s to the front of the stage after seeing their sign that read “Working on a full house. Boy? Girl?” When the couple arrived at the stage, the mom-to-be handed Garth a sealed envelope that contained the sex of their baby, due in December.

Before opening the envelope, Garth asked if the couple had picked out names yet. They responded that regardless of the gender, the baby’s name would be Brooks. A slightly emotional Garth opened the envelope then announced to the couple that they were having a baby girl.

“I’ve gotta tell you, I’m extremely happy for you because I have three of these,” Brooks said as the crowd erupted and the couple embraced.

Garth then made the Hansen’s an incredible promise. “Let’s make a deal. If I’m still alive when Brooks goes to college, we’ll pay for her college.”

In a statement to Country Rebel, Wes and Kay Hansen expressed their excitement over the upcoming birth of their baby and appreciation to Garth and Trisha for their involvement in the gender reveal.

“We are beyond excited for the arrival of our little girl! #BrooksHansen. We could not be more humbled and appreciative of Garth Brooks and Trisha Yearwood’s generosity and their willingness to include our reveal in their show,” the couple writes. “We are also very grateful for the outpouring of love and congratulations from everyone. We never imagined we would be honored with such a blessing and we could not be more thankful to all involved.”

Congratulations, Wes and Katy! Watch the couple’s epic gender reveal in the video below.