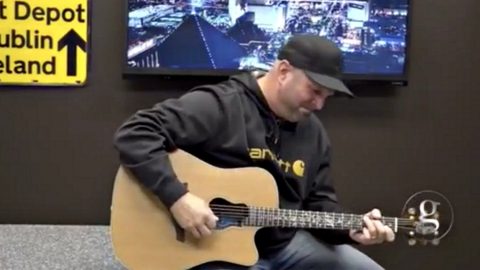 Garth Brooks is the latest country singer to take to social media to address the horrific shooting that took place in Las Vegas Sunday night (October 1). In a Facebook Live video posted Monday evening, Brooks fought back tears as he praised the heroic efforts of authorities and concert goers alike.

“We saw a lot of bad things. What I saw was a lot of courage. I saw a lot of love. Can’t thank the men and women in blue enough. Can’t thank the firefighters, EMTs, hospital staff, SWAT teams, everybody…and the volunteers,” Brooks said. “I’m very proud of how the audience handled itself. People were laying down on people to protect them. Just…character flows through country music. All our love to the victims and the victims’ families. All our love to the bands and crews.”

Garth went on to share that the events have been rough, but that he can’t even imagine what things were like out west. Garth then offered a challenge to his fellow artists who have to get on stage just one night after the Vegas tragedy.

“We don’t have a gig until Thursday in Indianapolis. We’re gonna get a second to digest this. I can’t imagine the people, the artists that have gigs tonight. And I know you’re probably wondering what to do. Here’s my advice. The show must go on. It just does,” Brooks said.  “All things good start with you. If you believe it, start it up. I’ll be the first.”

Garth then sang “The Change,” a touching ballad he first released in 1996 in the wake of the Oklahoma City bombing.

If you would like to help victims of the Las Vegas shooting, you can donate to the city’s verified GoFundMe page by clicking here or to the Music City Cares Fund set up by the Community Foundation of Middle Tennessee by clicking here.