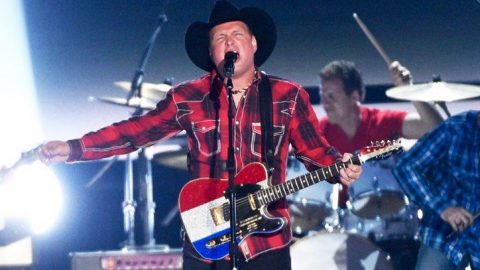 Garth Brooks floored viewers and audience members of Good Morning America when he gave a sensational performance of his 1997 song, “Belleau Wood” in honor of Veterans Day.

Please note, 10NOV is the Birthday of "the Corps" the one and only. @USMC fought so fiercely at Battle of Belleau Wood the Germans called them "Devil Dogs"

The singer was incredibly powerful and clearly emotional as he delivered his heartbreaking song based on an event that occurred during World War I. Known as the “Battle Of Belleau Wood”, the devastating event occurred in France and was classified as the first large-scale battle that was fought by American soldiers, losing over 10,000 deceased, injured, or missing upon its victory.

When the battle at Belleau Wood was over, the ground was soaked with the blood of nearly 10,000 American casualties, including more than 1,800 killed, and an unknown number of Germans.

Walking through the remains of World War I: https://t.co/FWVTLUO5I1 pic.twitter.com/vZysE5pgkI

Brooks’ song introduces the battle by explaining a “Christmas truce” that the soldiers implemented on both sides, as the main soldier of the story overhears an enemy soldier singing “Silent Night”. The soldiers, German and American, begin to gradually join in the song, singing together despite divide that had led them to fight.

“Then I thought that I was dreaming
For right there in my sight
Stood the German soldier
‘Neath the falling flakes of white.
And he raised his hand and smiled at me
As if he seemed to say
Here’s hoping we both live
To see us find a better way.”

The singer’s heartbreaking song assisted in addressing not the differences in society, but, rather – the similarities. Brooks’ live performance was incredibly raw and filled with emotion, lowering the heads of military members and audience members, both present and watching from afar.

Watch to the moving performance below.

Garth Brooks performs a wonderful rendition of his 1997 classic Belleau Wood on Veterans Day for all our military people on Good Morning America.