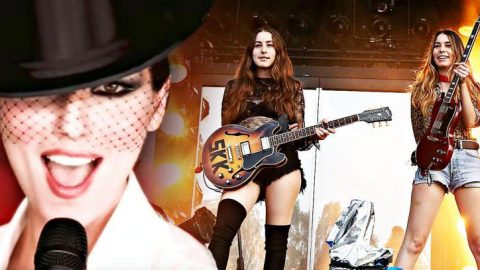 Tackling what is often considered one of the biggest musical hits of the 1990s, three sisters plug in their guitars and drums for a cover version of Shania Twain‘s iconic song that will leave you completely speechless!

Man, I feel like my wig fell off… #ShesSoPerfect @ShaniaTwain pic.twitter.com/044oHsWQ4Z

This three-part girl band is comprised of sisters from Los Angeles who grew up playing in their parents’ cover band and later built their own group together. As they’re known collectively, HAIM, has issued a growing list of Top 10 hits and several Platinum-certified collaborations, but it wasn’t until now that they really exposed their lifelong love of Shania Twain!

Appearing on radio show Triple J, HAIM took part in their series called “Like A Version” where bands come in and choose to perform a cover of a famous song live on-air. The three sisters knew exactly what to pick and with the very first guitar stroke – stole the hearts of every single listener that morning.

What a way to start a Tuesday, Haim covering Shania Twain! ? https://t.co/9wMSDdXpcG pic.twitter.com/5kYidI4lJB

This slowed-down and chilling cover version of “That Don’t Impress Me Much” features deep guitar notes, an incredible keyboard undertone, and percussion sounds that all blend magically with their voices. It’s truly something you have to see to believe!

With their newfangled take on this epic 1998 Shania Twain hit, these three surely are going to be asked to perform this at their shows in the future – and it’s something we think Shania would absolutely love!

Check out HAIM’s jaw-dropping magical tribute to this country pop legend in the video below and let us know what you think in the comments!