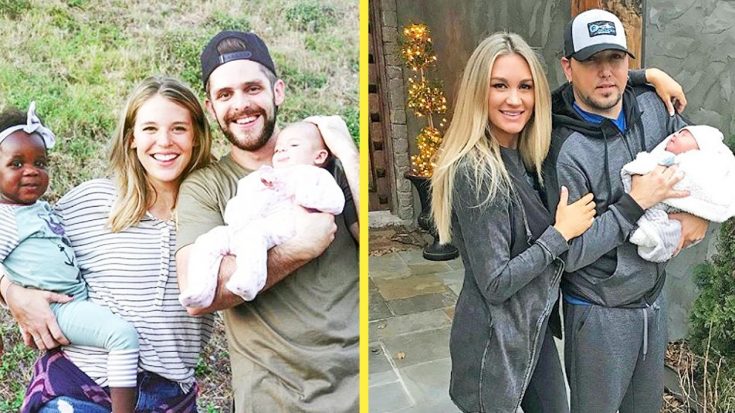 For years to come, 2017 will be known as the year of the country music baby boom. It seems like there was something in the water in Nashville, because a number of country singers welcomed new additions into their families this year!

Many artists became first-time parents in 2017, while others expanded their existing broods. Fans were clued in on all of the joyous milestones, from the pregnancy announcements, to the gender reveals, to the babies’ first photos.

As 2017 comes to a close, we’d like to revisit some of those photos and go gaga over the babies country music welcomed this year. Of course, we’d like to include you on this adorable journey! Just keep scrolling to check out all of the sweet snapshots we rediscovered.

In January, Kimberly Schapman of Little Big Town revealed that she and her husband, Stephen, had adopted a baby girl. During a media event, Kimberly shared that they named her Dolly after the one and only Dolly Parton.

“My husband is the one who thought of us naming her [Dolly] when we had hoped and prayed for this baby,” she said. “This was my husband’s idea. So, it’s perfect. I love it.“

The couple introduced Dolly with the adorable photo above, which also includes their oldest daughter, Daisy.

Well, Evelyne Nadine decided to have her birthday early! Em and I had a number of scares this morning but God intercepted every one of them with His powerful sovereign love.. I couldn't be more thankful to have our baby and my wife safe and loved..

Mo Pitney and his wife Emily welcomed their first child, a daughter, on January 12. Evelyne Nadine arrived prematurely, prompting a few scares on the day of her birth.

But all turned out alright, with Mo writing on Evelyne’s birth announcement that he, “couldn’t be more thankful” that his little girl had arrived safely. He introduced Evelyne through the photo above, and she’s been the star of his social media accounts ever since.

YALL ????? Our baby girl is hommmmeeeeee ??????? Thank you Jesus for bringing our family together on the same continent finally 🙂 little cutie Willa Gray Akins came home yesterday after completely stealing our hearts in Uganda over a year ago & we're sooooo happy we just can't stand it ?????????????????????????????????????????? • • • **PARENTS OF THE YEAR: thank you mom & dad for bringing her home since this pregnant mama is officially grounded due to baby Akins #2 coming in August ??? • • • **FRIEND OF THE YEAR: thank you sweet @kaileydickerson for capturing some of the most special moments for us & for traveling with me to Uganda and back??? • • • ** our FRIENDS & our FAMILY OF THE CENTURY: y'all have walked through and prayed through every single moment of this adoption with us, were our ROCKS through it all, kept it a secret, and truly had faith & hope for us when we felt like we had none left. I could cry thinking about each one of you-y'all know who you are & we are beyond blessed with our community God has given us?? we love y'all more than any words could come close to describing. I might just throw you all a giant party celebrating y'all ?????????? • • • BRB STILL FREAKING OUT OUR DAUGHTER IS HOME ??????????????????????

While working as a nurse in Uganda with the organization 147 Million Orphans, Thomas Rhett‘s wife Lauren Akins instantly fell in love with one of the little girls she met there. Once Thomas saw a photo of her, he knew that he and Lauren needed to adopt her.

The couple began the adoption process quite some time ago, and kept it a secret from fans. They finally announced the news in February, which is when they also revealed they were expecting a baby of their own.

Finally, Thomas and Lauren brought home their daughter Willa Gray in May. Although the above set of photos are from when she came home, Lauren had been sharing pictures of Willa on her Instagram for months, we just never knew she was planning to adopt her!

We are so blessed and beyond overjoyed to bring our precious baby girl into the world. She's beautiful, happy and healthy, we could not ask for anything more. Introducing Trulee Nanette Brice. Born June 2, 2017 at 9am, weighing 7lbs, 13 oz and 20 inches long.

Lee Brice and his wife Sara welcomed their first daughter, Truelee Nanette, on June 2. She joined big brothers Takoda and Ryker, making the Brice clan a family of five.

We got to meet Trulee through the photo above, which Lee shared after her birth. “She’s beautiful, happy and healthy, we could not ask for anything more,” Lee wrote.

Last night at 10:28 PM Ada James Akins was born and it was truly the most amazing thing I have ever experienced. I can't believe that we have two daughters!! My wife @laur_akins labored almost 36 hours?She is by far the strongest human being I have ever met and I have a new found respect for moms around the world. We are so excited that Willa Gray has a baby sister! Thank you Lord and everyone for the prayers?? #outnumbered

Three months after bringing home Willa Gray, Thomas and Lauren welcomed their biological daughter, Ada James. Lauren was in labor for 36 hours before Ada was finally born on August 12.

Thomas and Lauren both introduced Ada with the same photo, but wrote unique captions. Reflecting on his daughter’s birth, Thomas wrote that it was “truly the most amazing thing” he had ever seen.

Ana Cristina Cash and I are beyond grateful today. We would like to announce the birth of our daughter Grace June Cash,…

John Carter Cash and his wife Ana Cristina Cash welcomed their first child together, a girl, on September 11. They named her Grace June, with her middle name clearly meant to honor her grandmother, June Carter Cash.

The world was introduced to Grace a week after her birth. John shared a few photos of her to announce her arrival, saying he and Ana were “beyond grateful” to have her in their lives.

After struggling with fertility issues, Brantley Gilbert and his wife Amber were overjoyed to learn that they were expecting their first child together. Their son, Barrett Hardy-Clay, was born on November 11.

The Gilberts revealed the news of Barrett’s birth in an interview with People. During that interview, Brantley explained that his son’s hyphenated middle names are family names. Hardy comes from Amber’s father’s side of the family, while Clay was Brantley’s PaPaw’s middle name.

After they spoke with People, Brantley shared a simple photo on Instagram to introduce his son. “Still speechless….” he wrote.

Both Brittany and Jason introduced Memphis to their fans with the same photo on Instagram. Writing about the day, Brittany called it the “HANDS DOWN HAPPIEST” day of her entire life.

Everyone meet Beckett Scott Robinson! Born today at 5:20pm weighing 8Ibs and 21inches long. @blair_a_robinson did so good! Thanks to everyone for all the prayers. We are now one healthy happy family of 3. #myboy

Dylan Scott and his wife Blair welcomed their first child on December 12. Blair gave birth to a baby boy, who they named Beckett Scott.

We first saw Beckett after Dylan shared the above photo on Instagram. The “My Girl” singer was clearly over the moon about his son’s birth, writing, “We are now one healthy happy family of 3.”

Ryder Falcon Atkins, our most precious Christmas present is here. @rosefalcon Thanks @people

Rodney Atkins and his wife Rose Falcon welcomed their first child together on December 14. He joined big brother Elijah from Rodney’s previous marriage.

The proud father shared a photo to Instagram to announce the arrival of his son, calling him, “our most precious Christmas present.” Since then, his Instagram page has been flooded with photos of his new baby boy.

We’d like to welcome our beautiful Christmas gift Lillie Renee Haywood. Born today at 11:14am, at 7 lbs 6 oz, 19 in. She is named after both of her grandmothers. Kelli and Lillie are happy and healthy, and Cash is already a great big brother. God is good!

Lady Antebellum‘s Dave Haywood and his wife Kelli welcomed their first daughter just in time for Christmas. Born on December 22, the couple named their little girl Lillie Renee after both of her grandmothers.

Lillie joins big brother Cash, who is three. When Dave introduced his daughter on social media, he said, “Cash is already a great big brother!“

I had no idea I could love somebody as much as I love @hayley_hubbard but last night God gave us Olivia Rose ? and melted our hearts. We love this little girl more than words can describe and it hasn’t even been 24 hours yet. Our life has been forever been changed for the better. Y’all go check out our story on @people (link in bio). I can’t wait to share more photos with y’all. I’ll try to contain myself from being the annoying parent that post 50 pics a day but I’ve already taken over 100 so forgive me.

After originally believing that they were having a boy, Florida Georgia Line‘s Tyler Hubbard and his wife Hayley welcomed their beautiful baby girl on December 23. They named her Olivia Rose, and it appears she’s already stolen her father’s heart.

Tyler shared a couple of photos to introduce his daughter to the world. He gushed about his affection for her in the caption, writing, “We love this little girl more than words can describe and it hasn’t even been 24 hours yet.”

Tay, Jax, Kota, and I are proud to announce that last night, Graydon Scott was welcomed into our home and hearts! The last week of December will forever be a huge week in the Boyd Family! Story link in bio. #GraydonScott

Voice winner Craig Wayne Boyd and his wife Taylor welcomed their second child together on December 28. Taylor gave birth to a boy, who they named Graydon Scott in honor of Craig’s great-grandfather.

Graydon joined the couple’s daughter Dakota, who turns two on December 31, and Craig’s son Jaxon, who is five. When he announced Graydon’s birth on social media, Craig wrote, “The last week of December will forever be a huge week in the Boyd Family!“

When it comes to music, no song seems to describe the 2017 country music baby boom more than Thomas Rhett’s “Life Changes.” He wrote the song about many milestones in his life, including Willa’s adoption and Lauren’s pregnancy with Ada. You can listen to it in the clip below.

Congratulations to all of these country couples on their new additions this year!