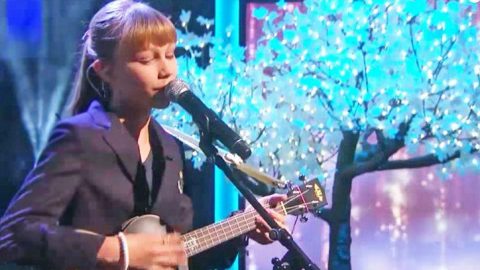 Grace VanderWaal returned to the stage where we first met her six months ago for a chilling performance of “Frosty the Snowman” as part of the “America’s Got Talent Holiday Spectacular.” The biggest acts born out of the reality competition series all came together in celebration of the most wonderful time of the year, the Christmas season.

Backed by a children’s choir, VanderWaal miraculously managed to give the classic Christmas tune an enchanting twist, evolving it passed a simple children’s song to something much more. The judges – Simon Cowell, Heidi Klum, Mel B. and Howie Mandel – beamed throughout the performance, noticeably proud of all that she has accomplished in such a short amount of time.

The 12-year-old singer-songwriter became an overnight pop culture sensation after her moving audition of her signature song, “I Don’t Know My Name,” went viral, earning a spot in the top five most viewed YouTube videos of 2016 with a staggering 46.8 million views since its June release.

“This is a show about surprises,” Mandel praised following her audition. “I think you are a living, beautiful, walking miracle. Your original song about people not knowing your name … I think the world is going to know your name.” A prediction that time has proven true.

The 12-year-old overnight sensation recently released her debut EP, Perfectly, Imperfect, featuring all her own original songs the nation fell in love with during her stay on America’s Got Talent plus a haunting new song, Plastic Girl.

The young singer has been in for a world of change since she has transformed herself into a household name. VanderWaal now sports long locks, became the mother to a pug named “Frankenstein,” travels the country playing her original songs, headlined her very own Vegas show, and has transitioned her studies to online.

“It’s changed with confidence in myself,” answered VanderWaal when asked in a recent interview on The Talk how her life has changed in the past few months. “Also just going out to stores and having to take photos…It’s all different. Especially with school…It’s super different than normal public school.”

She goes on to say she is at the top of her online school and that she’s on the high honor roll. VanderWaal also gushes over meeting with celebrities she’s looked up to for years such as Kelly Clarkson.

The young ukulele player still maintains that same down-to-earth demeanor America fell in love with all those months ago. You can watch her enchanting performance in the video below.