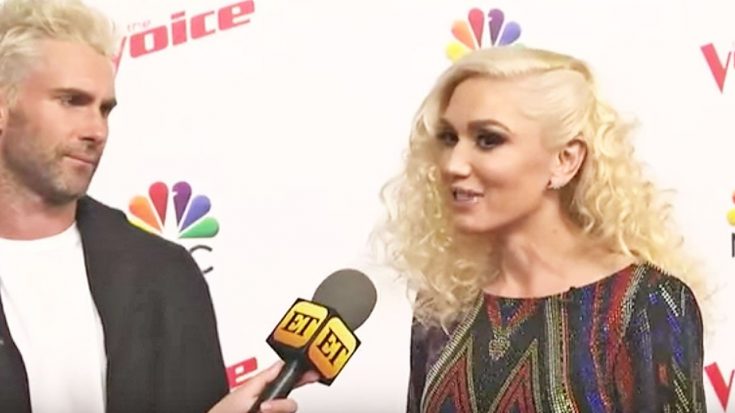 Prior to critiquing the Top 12 contestant’s performance on Tuesday night’s episode of The Voice, Gwen Stefani and Adam Levine did a little critiquing on their fellow coach Blake Shelton‘s life choices. In a hilarious red carpet interview, Stefani revealed the one thing she does not want her boys learning from her country crooner boyfriend.

Entertainment Tonight’s Sophie Schillaci stopped the two Voice coaches to comment on Stefani’s sons recently rocking temporary tattoos in the style of Shelton’s barbed wire and deer tracks tattoo on his forearm, going on to ask the mother of three how she would feel if her boys sported real tattoos.

“I don’t know, tattoos are, you know, is your mom mad at you for those?” Stefani asked Levine. “I don’t know, I feel like my niece just got like a bunch of tattoos and I’m really mad at her, she’s 21. I’m like, ‘What are you doing?’”

The Maroon 5 frontman, who is covered head-to-toe in tattoos, jumps into the conversation to ask her just exactly what she is trying to say is “wrong with tattoos?”

“I don’t know, I just I don’t know, like, there’s nothing wrong with them,” said Stefani. “If my kids wanted to get one, I would hope that we could talk about what it is so that we don’t have big regrets in the future.”

After hearing her out, Levine admitted that while he may be covered in ink, he hopes that his daughter Dusty Rose will stay away from them. While the two coaches may have differing opinions on sporting tattoos, they definitely have one opinion in common on the subject of permanent body art.

“Hopefully, they won’t get one like Blake’s tattoo,” Stefani joked with Levine as the two walked away.

Hopefully Blake doesn’t get too offended! You can watch the full interview below.