Intimate Footage Lets You Hang With Hank Jr. As He Croons The ‘Honky Tonk Blues’ 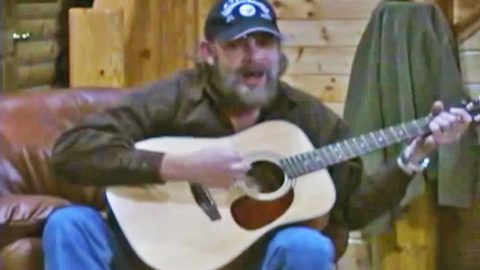 As fun as a music video can be, sometimes the music gets lost in all of the glitz and glam surrounding the production. That’s why fans value videos that showcase an artist’s acoustic or stripped-down take on a song. The intimacy allows them focus on the music and the music alone.

Such videos also generate a more personal tone, making the viewer feel as though they are sitting right there with their favorite artist. Hank Williams Jr. knows how powerful these types of performances can be, which is why he shared a whole batch of them on his official YouTube channel.

One of the videos that Hank Jr. shared showed him performing the song “Honky Tonk Blues.” The song was written and originally recorded by Hank Jr.’s father Hank Williams, who recorded it in 1952 and released it as a single.

Hank Sr. experienced great success with “Honky Tonk Blues” following its release. The song reached the second spot on the Billboard Hot Country Songs chart, making it one of the most successful singles of his career.

“Honky Tonk Blues” has been covered by many artists since then, including the Nitty Gritty Dirt Band, Waylon Jennings, and Don Williams. Hank Jr. also recorded his own rendition of the song in 1965, which was overdubbed as a duet with his father. He later recorded it with his son Hank III for the 1996 album Three Hanks: Men with Broken Hearts.

Hank Jr. shared an intimate video of him singing the “Honky Tonk Blues” in 2011. The video shows Hank Jr. hanging out on a couch, just strumming along on his acoustic guitar as he croons the lyrics his father wrote decades ago.

We love seeing these types of performances from Hank Jr. and we’re sure you love them too! That’s why we’re confident that you’ll enjoy watching him sing “Honky Tonk Blues” in the video below.

If anything, this video’s raw approach proves that Hank Jr. has natural-born talent!