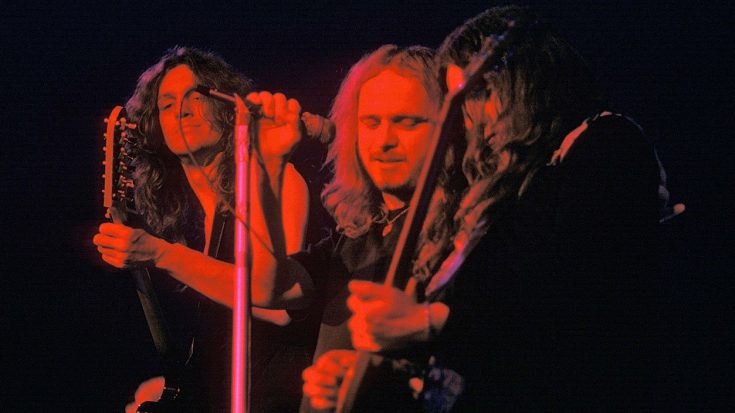 When you think romantic music, Lynyrd Skynyrd‘s songs probably aren’t the first ones that comes to mind. In fact, the Southern rockers’ tracks probably don’t even rank in your personal list of Top 25 romantic tunes.

But true Skynyrd fans know that the band has recorded plenty of lovey-dovey songs, you just have to know where to find them. They aren’t going to be their major hits like “Free Bird” and “Sweet Home Alabama.” Rather, it’s the non-single tracks or historically less popular songs that ooze feelings of love and romance.

One such song is “Sweet Little Missy,” which first appeared on the 1987 posthumous compilation album Legend. It later earned a spot on the 2001 CD reissue of the group’s 1977 album Street Survivors.

Written by guitarist Gary Rossington and lead vocalist Ronnie Van Zant, “Sweet Little Missy” features suave and smooth-as-silk lyrics. The narrator speaks about a “sweet little missy” that he knows and how he has found himself hopelessly in love with her.

While the narrator promises to shower the girl with affection, she holds back from giving him hers in return. Despite this, the narrator doesn’t give up his pursuit, singing, “Well I’m the one that wants you forever and a day. Come on baby, what’d you say. Just don’t be afraid.”

As sweet and seemingly soft as the lyrics may be, the song itself features a nice dose of Skynyrd’s signature rockin’ sound. Granted, it is a bit more subdued in the track, and takes on more of a groovy, bluesy feel than their distinctly more rock-like material.

It’s time for you to take a listen to this treasure of a track in the audio clip below. Now you can say that a Skynyrd song is one of your favorite romantic tunes!