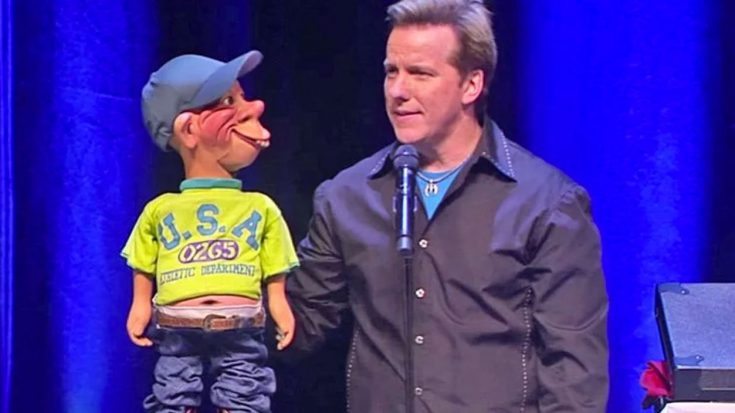 Over the course of his career, comedian Jeff Dunham has made a name for himself as a comedian and ventriloquist, enlisting multiple different puppets with various unique personalities to join him in hysterical standup routines. The characters possess a wide range of different distinct identities. From Walter the retired Vietnam War veteran with a dark view on society, to Sweet Daddy Dee the self-proclaimed pimp.

While all puppets may have been created equal, one stands far above the rest. Dunham and his good friend, redneck Bubba J, got together for an intimate conversation about how Bubba J met his wife.

“Where’d you meet you wife?” asks Dunham, to which Bubba responds, “At the family reunion!”

Bubba then goes in to detail on how he met his lovely wife, explaining he first laid his eyes on her while she was leaning up against a ferris wheel, causing it to “tilt” while double-fisting a corndog and Budweiser simultaneously. Stricken with love caused by her overwhelming beauty, Bubba quickly devised a plan to woo her.

Bubba walked right up to her and said, “Young woman you look more delicious than mayonnaise oozing out of a ham sandwich!” The feeling was apparently mutual and the two embarked on a whirlwind romance, before the young lady’s father strongly suggested he propose to his beautiful daughter. How does one suggest a proposal you ask?

“I was supposed to pick her up one night at 7 o’clock and got there about 7:30, and her daddy was on the front porch with his shotgun and said, ‘Bubba J! Guess who else is late?’”

Per his father-in-law’s suggestion, the two quickly got hitched at the town’s chapel with the reception taking place at the nearby Walmart to save them a trip back to the store should they want to return some of their wedding gifts.

Dunham often uses Bubba J in standup routines surrounding his love for drinking beer, NASCAR, and life within the trailer park. The puppet appears often in Dunham’s hysterical comedy specials, Arguing With Myself, and has a prominent role as a backstage security guard in Controlled Chaos.

He was named “America’s favorite comedian” by Slate.com and is the top-grossing standup act in North America according to Pollstar. Dunham has been widely credited with the revival of ventriloquism in mainstream comedy as well as the lead ventriloquist since Edgar Bergen.

You can hear the hysterical standup act in the video below!