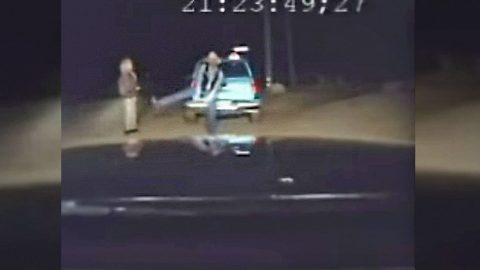 One intoxicated cowboy experienced quite the night when his shaky drive home caught the attention of a nearby cop, prompting the officer to pull over the suspected drunk driver and embark on an arrest she can never forget!

Upon pulling stopping the vehicle, the officer cautiously approached the driver’s window and struck up a conversation about the man’s evening.

“How ya doing’?” the officer asked with a stern, and clearly skeptical, tone. The man assured the woman that he was “great,” even asking how she herself was feeling!

“I’m not so good ‘cuz you were weaving all over the road there.” Before the cop was able to press on with an investigation or further questions, the man interrupted with a sharp, “Well, can we get one thing straight? I have not been drinking!”

The scene cuts to the man standing outside the vehicle before the officer, following her instructions to slowly alternate his hands to touch the tip of his nose. After acing his first task, the cop orders the man to recite the alphabet backward instructed to begin at the letter Z and continue until reaching A.

In an unexpected turn in events, the cowboy is exceptionally well-versed in this procedure, quickly and effortlessly naming each letter in reverse order. Knocking the sobriety test out of the park, the cop admitted, “Remarkable. I’ve actually never seen anybody do that.”

Seeing that his mental stability was intact, the officer began to administer a balance test, asking the man to successfully walk a straight line directly before him. Following the theme of the night, the cowboy was anything but phased, even finishing his catwalk with a fancy spin that caught the woman’s attention. The remainder of the encounter consisted of this suspected DUI driver transitioning into a dance routine, both choreographed by the officer and the prospective drunk.

It was the man’s freestyling, however, that landed him in hot water and essentially blew his drunk cover! Upon taking the dancing into his own hands, the cowboy began to showcase a series of downright hilarious, and weirdly impressive moves, leaving the officer to ask, “That was really good. You a dancer?”

“No no no. I’m just drunk,” the man says, indirectly admitting to a DUI! The two begin to chuckle as the cop is left with no other choice than to arrest the man who definitely left her with a comical experience she’ll never forget! Fortunately, this was not a genuine encounter but rather a hysterical clip from the show Reno 911.

Check out the hysterical clip below!