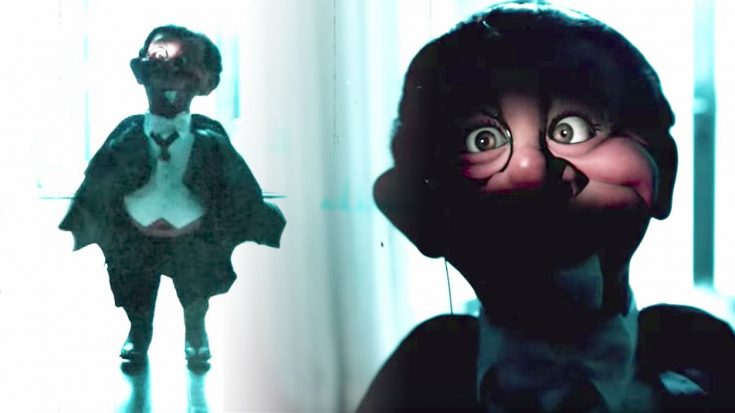 Halloween may be at the end of October, but people start celebrating the holiday as soon as October 1 rolls around.

Scary movies seem to be the go-to source for entertainment during the entire month. People turn out in the millions to watch new horror flicks, while others revert back to some of the classics.

Leading up to Halloween 2016, comedian and ventriloquist Jeff Dunham decided to make a few short scary movies of his own with the help of some of his puppets. All of them teamed up to portray famous films of the past. For example, Dunham’s grumpy puppet Walter took on the role as Frankenstein’s monster in a film appropriately titled The Monster.

As for everybody’s favorite redneck puppet Bubba J, he was tasked with portraying a Dracula-like character in a spooky vampire film. Bubba J certainly looked and dressed the part, with shiny black hair and a jacket with a collared shirt.

The peek into Bubba J’s film shows him sneaking up on an unsuspecting lady who opens her eyes to see him looming over her. Bubba J bites the woman, and ends up changing her into a vampire as well.

Dunham takes on the role as the vampire hunter, and manages to end Bubba J’s reign of terror by forming a crucifix out of a tube of toothpaste and a toothbrush. For you see, vampire Bubba J only has one giant tooth, and his film is called The Tooth of the Vampire.

Dental hygiene must be vampire Bubba J’s weakness, because he immediately gave in to Dunham at the sight of the toothpaste and toothbrush.”Oh no!” he exclaimed in horror. He then went on to say, “Okay, maybe, but I’m not gonna floss.”

So spooky! Watch Bubba J, Walter, and Dunham’s other puppets as horror movie characters in the Halloween-themed video below.