By Miranda Raye on February 23, 2018
Advertisement 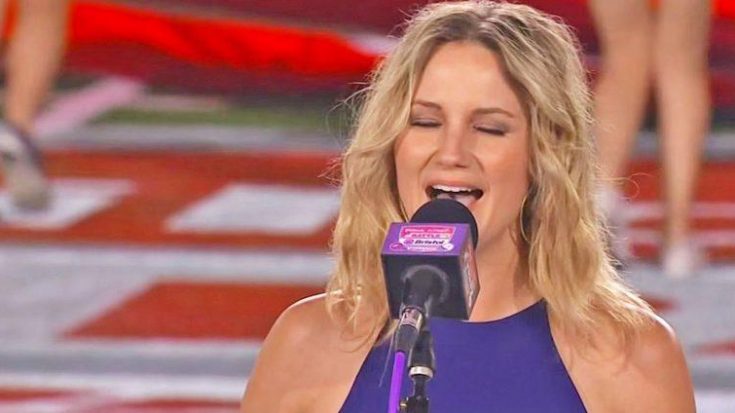 There’s no denying the fact that Jennifer Nettles has one of the most beautiful and unique voices in all of country music. From her emotional performance in Sugarland’s “Stay” to her slightly seductive delivery of her solo song “That Girl,” Nettles has proven that she has the vocal power to tackle any song.

But it was her performance of the National Anthem at the University of Tennessee vs. Virginia Tech football game on Saturday night (September 10), that showed everyone why Nettles is regarded as being one of the most talented female vocalists in country music right now.

From the first note, Nettles had the packed stadium hooked on her every word. As she started to sing the opening lines, people rushed on the field behind her and unfolded a giant American flag. At the same time, fans in the stands held up red, white, and blue signs which made it look like a giant flag was flying throughout the stadium.

But Nettles’ performance became even more breathtaking as it continued. She let her voice soar into the sky as she sang about the “rockets red glare,” while at the same time red fireworks shot out from the sides of the stadium. The crowd roared for Nettles at this moment, impressed by her performance so far.

Her performance continued to become more magnificent as it continued, and she finished with a passionate and powerful conclusion. It was made all the more touching over the fact that it occurred one day before the 15th anniversary of September 11. We’re sure that everyone in the crowd had that tragic day on their minds as they listened to Nettles sing beautifully about the resilience of our country.

The video of Nettles singing the National Anthem has since gone viral, and you’ll see exactly why when you watch it in the clip below. Don’t be surprised if you find yourself moved to tears by her performance, because it’s that stunning.