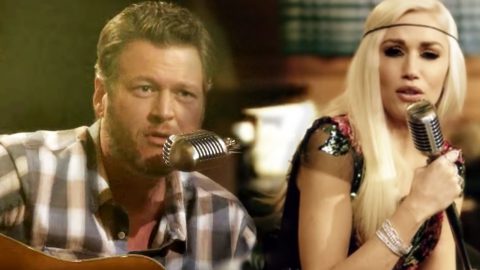 In one of the very first clips from this unforgettable season, all four superstar ‘Voice’ coaches sit down with a few guitars and some old-fashioned microphones to jam out like you’ve never seen before.

Adam Levine, Gwen Stefani, Alicia Keys, and (of course) country hunk Blake Shelton get together in a very rustic-looking room to jam out together and end up giving one of the best acoustic performances that a group of ‘Voice’ coaches has ever delivered!

The season kicked off in February 2017, the season 12 of The Voice was one of the best ones yet, filled with laughter, comical banter from Shelton, and stunning previously-undiscovered talent who showed America all they’ve got.

This pre-season clip had both Levine and Shelton playing guitar with Keys coming in on the piano as they performed a slowed-down acoustic version of the 1995 worldwide super-hit, “Waterfalls.”

“Waterfalls” was originally written and performed by the members of pop/R&B girl group TLC for their second album. The song earned them numerous awards, topping charts around the world at No. 1 and was certified platinum in four countries. The song even earned the group two separate Grammy nominations.

Watch all four of season 12’s ‘Voice’ coaches deliver this beautiful song in an amazing four-part acoustic session below.