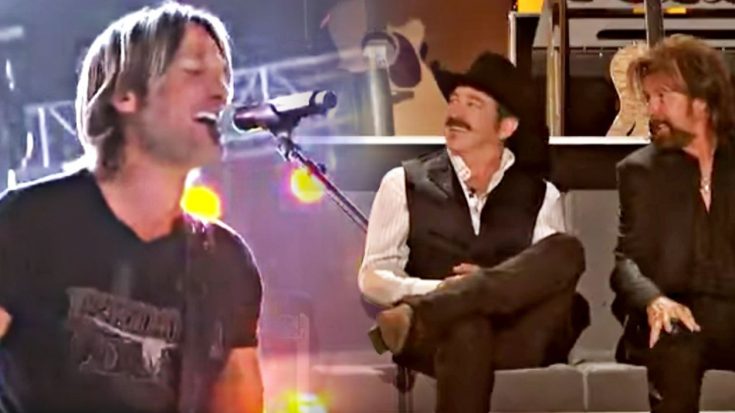 The “Final Rodeo” was one of the biggest nights to ever hit country music and when superstar, Keith Urban, took the stage for his tribute to this iconic band – the entire world felt it!

Brooks & Dunn is known worldwide as one of the foremost duos in country music, and their album Brand New Man is a huge part of their history.

Released in 1991, both the album and its title track were some of the hottest things in country music at the time – and the album became the very first by a duo to be certified quadruple-platinum by the RIAA. As of recent records, the album has sold more than six million copies.

7yrs ago today @KeithUrban joined @Brooks_Dunn for "Believe" at the 1st night concert of the CMA Music Festival! pic.twitter.com/o97yotcU6c

Singing their chart-topping masterpiece “Brand New Man,” Urban unleashed one of his best cover performances of his career to honor this legendary duo in a way no one else could.

8 years ago Brooks & Dunn played the final gig of the Last Rodeo farewell tour at Nashville's Bridgestone Arena with proceeds headed to the Country Music Hall of Fame. #MusicIsLife pic.twitter.com/oynqhO4QQL

The whole time he was on stage, slaying one of their biggest hits, both Ronnie Dunn and Kix Brooks were beaming from the side of the stage – completely thrilled with the performance and Urban’s unmatched talent.

Watch the full performance in the video below and let us know what you think of it in the comments!