All-Female ‘Voice’ Team Performs ‘Man! I Feel Like A Woman’ 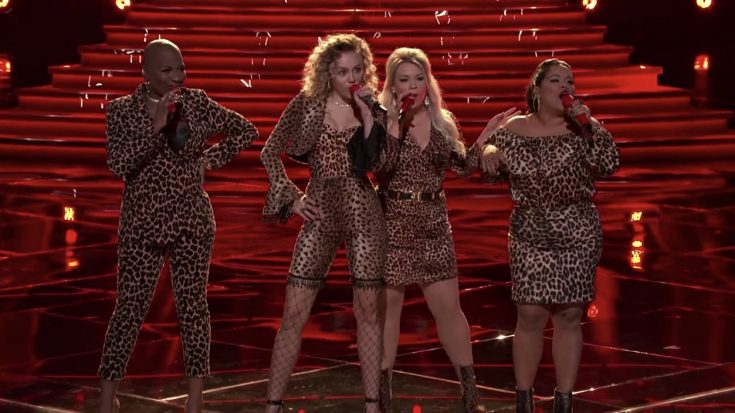 Miley Cyrus knows a thing or two about girl power so it was no surprise that she and her all-female Voice team tackled one of country music’s most popular female empowerment anthems during 2017’s Top 11 elimination episode.

Clad in Shania Twain-esque cheetah print outfits, Miley Cyrus and her team (Brooke Simpson, Ashland Craft and Janice Freeman) joined forces to take on Twain’s Grammy Award-winning hit, “Man! I Feel Like A Woman.” The ladies, each with their own unique style, swapped turns on the lyrics and danced across the stage while obviously having a great time performing the mega-hit.

The song, released by Shania Twain in 1999, became one of her most popular and recognizable hits. In an interview shortly after the song’s release, Twain revealed the inspiration behind the tune, saying that it’s a celebratory song about being a feminine powerful woman.

“That song started with the title, then it kind of wrote itself. The whole expression is a celebration of being a woman these days, I think we’re kind of spoiled in a lot of ways, with the advantages we have. Feminists may not feel that way, but I do. It’s pretty darn fun to be a woman. A lot of the stuff I do has such a feminine, female perspective, but a powerful one.”

The song was a fitting choice for Voice coach Miley Cyrus who can forever boast that she had the first all-female team in Voice history. Unfortunately for the team, Janice Freeman was sent home moments after their performance, leaving two Team Miley members moving into the Top 10.

Check out Miley and her squad singing “Man! I Feel Like A Woman” below and let us know what you think.