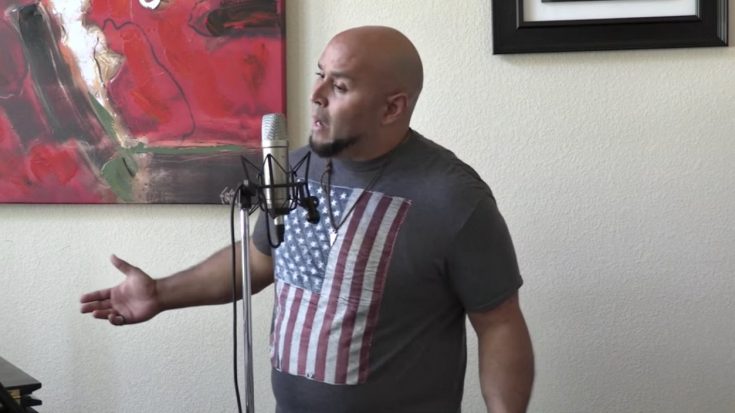 Kris Jones‘ life changed in early 2017 when his cover of “Tennessee Whiskey” made him a viral superstar. The video, captured by his daughter, has garnered more than 60 million combined social media views to date and earned the Alvarado, Texas, native an impressive following and the title of America’s favorite singing dad.

Follow up covers of Lynyrd Skynyrd‘s “Simple Man” and Keith Urban’s “Blue Ain’t Your Color” have also gone viral, but it was Jone’s rendition of “Tennessee Whiskey” that caught the eye of Ellen producers who flew Jones and his family to California to appear on the show.

When asked by Ellen if he had auditioned for American Idol or The Voice, Jones said he tried for both. At the time, he was 5 months too old for American Idol, and he was rejected by The Voice after singing only 7 notes during an audition in Dallas. After Jones’ “Tennessee Whiskey” video success, he was contacted by The Voice who wanted to give him another chance. The father of three ultimately turned down the offer, feeling that it wasn’t the best decision for his family, but he has kept his fans happy with Facebook Live concerts and cover videos.

Now Jones is back with another stunning cover tune. Accompanied by only a guitar, Kris lends his smooth, soulful vocals to the 1983 George Strait classic “You Look So Good In Love.” While it’s tough to imagine anyone other than King George singing the ballad, Jones proves that a his voice is made for songs like this, and leaves us anxious to hear more!

Jones released his debut EP in 2017 and broke the Top 10 on the iTunes country albums charts. If his debut album is any indication of his future, this singing dad is going to be around for years to come!

Check out Kris Jones singing “You Look So Good In Love” in the video below.