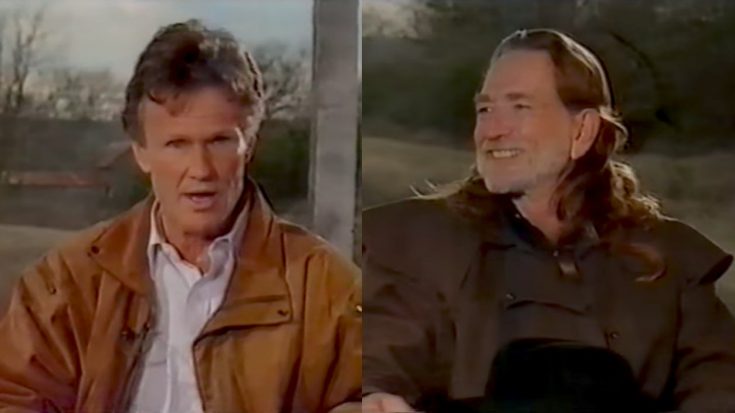 You would be hard-pressed to find a friendship in country music that has lasted longer than that of Kris Kristofferson and Willie Nelson. You’ll also find it hard to find someone who enjoys a good prank more than Willie Nelson. So, it’s no surprise that Nelson set up his good friend for an epic prank that aired on the popular television show Super Bloopers and Practical Jokes.

The prank took place while Kristofferson and Nelson were promoting their 1991 film Another Pair of Aces. With the help of the show’s host, Ed McMahon, Nelson orchestrated a phony television interview in which the pair took phone calls from fans live on the air.

Nelson and Kristofferson answer some questions about the movie from the interviewer, the two take some calls from fans. When the third caller gets on the line things start to get interesting. A enthusiastic caller named “Debbie” informs the country singers that she has been in labor for three hours and wanted to call while she was waiting on her husband to get the car.

After asking Kristofferson about a previous movie he had made with Barbra Streisand, Debbie starts having a contraction and begins to panic. Kristofferson reacts by coaching the woman saying, “Hey Debbie, do shallow breathing. Don’t push. Relax.”

As Kris gets more concerned for his fan, Willie sits silently while trying to stifle his laughter.

“Are you lying down?” Kris asks Debbie. “Shallow breathing and don’t push.”

Debbie continues to labor and eventually delivers the baby….a boy. The news shocks Kristofferson who is visibly shocked by what had just transpired. As Willie laughs at his friend’s reaction, Kris delivers a nervous chuckle before asking about the baby.

“Hey, does anybody got the baby?” Kristofferson asks as Debbie’s pretend husband gets on the phone. “How is the baby? Is anyone looking at the baby?”

Debbie’s husband replies that the baby is fine before declaring his excitement over spekaing with the country star. “This is such an honor to share this moment with you…on television…all of us together.”

Willie then decides that it’s time to let his friend off the hook and reveals to Kris that he’s been the target of a hilarious prank.

Watch the prank unfold in the video below.