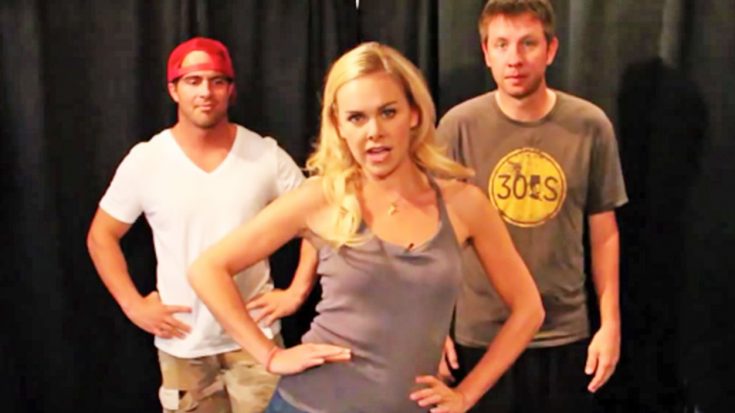 Laura Bell Bundy will have you kicking the dust up with her sexy line dance to the tune of her 2013 country hit “Two Step.”

In an appearance on the Bobby Bones Show, Bundy showed the cast how exactly to get the moves to her hit country tune right. And what better way to do that than a fun-filled dance tutorial?

“We’re gonna teach the ‘Two Step’ right now!” announced Bundy at the beginning of the video backed by two men eager to learn the dance. “Are you guys ready? Okay!”

The talented dancer then proceeded to show the boys and her fans wanting to learn how to execute her difficult line dance, Bundy giving up shortly after the men failed to grasp her tips.

Best known for her work on Broadway starring in major roles such as the original Amber Von Tussle in Hairspray and Elle Woods in the musical version of Legally Blonde, Bundy has released multiple country music albums, including Achin’ and Shakin’ featuring her smash hit single “Giddy On Up.”

“Two Step” was released back in 2013 off her album Another Piece of Me and peaked at No.59 on the country chart.

You can watch the video tutorial for “Two Step” in the video below.