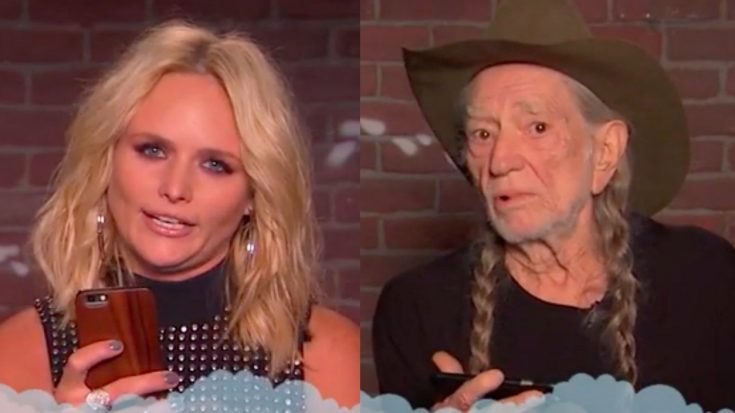 Jimmy Kimmel has his own unique way of celebrating the CMA Awards, and that includes a special edition of his infamous ‘Mean Tweets.’ During the latest round of ‘Mean Tweets,’ Kimmel rounded up country music’s biggest stars to read some of the most vile and hateful tweets people have posted about them.

Chris Stapleton, Dan + Shay, Trace Adkins, Miranda Lambert and many more took part resulting in one of the funniest ‘Mean Tweets’ to date. While most of the artists found their tweet funny, others weren’t all that impressed.

First up was Trace Adkins who read his tweet with little emotion, but quietly uttered, “disconcerting” while shaking his head.

“Just because you have a beard, ponytail, and a cowboy hat doesn’t mean you can sing. You know how I know? Trace Adkins.”

Miranda Lambert wasn’t immune from the critics who got personal with a tweet about her looks.

“In case of national emergency, all air traffic will be redirected to Miranda Lambert’s forehead.”

One of the greatest ‘Mean Tweets’ of the night was read by Willie Nelson. The tweet simply read, “Willie Nelson, you’re getting pretty crusty pal.”

Watch the full clip of Jimmy Kimmel’s ‘Mean Tweets – Country Music Edition’ in the video below!