Remember When The Dixie Chicks Brought Beyonce To The CMAs? 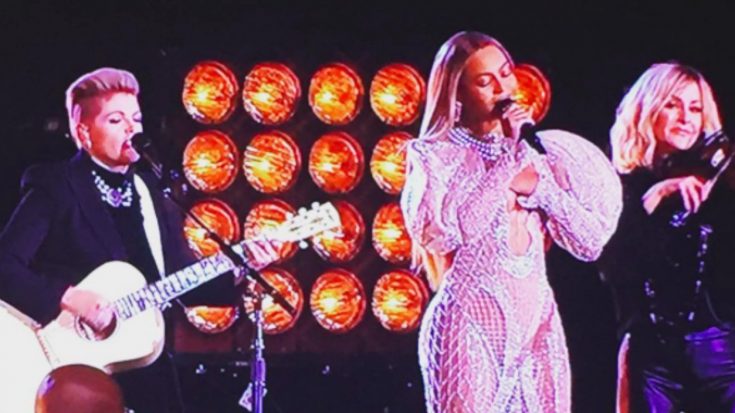 The internet caught fire this afternoon as the news leaked that Beyonce was scheduled to perform at tonight’s CMA Awards. Rumors swirled that the Grammy Award winning singer would be joining the Dixie Chicks to sing ‘Daddy Lessons’ from her latest album, Lemonade.

The news confused and angered country fans as they were promised a CMA Awards show free of pop crossovers and full of tributes to some of the genre’s biggest stars. But, when all was said and done, the Beyonce/Dixie Chicks collaboration may go down in history as one of the best crossover collabs ever.

If anyone was concerned about the Dixie Chicks being welcomed back to Music City after their infamous 2003 political controversy, those worries can be put to rest. Country artists seemed to welcome the Grammy Award winning trio back with open arms.

While there was some initial shock when the curtain opened to reveal the women on stage, the crowd eventually rose to its feet with many in the audience singing along.

What did you think of the surprise appearance by the Dixie Chicks and Beyonce? If you missed it, check it out below.