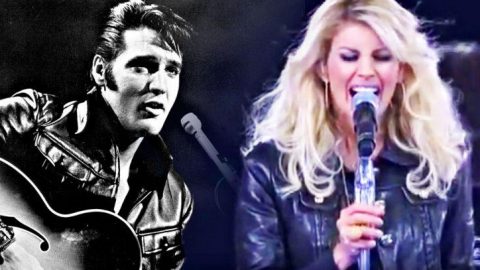 Hitting up The King’s old stomping grounds, this country queen delivers one of the best covers of his unforgettable hit, “That’s All Right”, that you’re likely to ever hear!

On December 3rd, 1968 NBC aired Singer Presents…Elvis, now known as the '68 Comeback Special. Today we celebrate the 50th Anniversary of this iconic TV performance that marked Elvis' return to the stage & reminded everyone why he was known as The King of Rock 'n' Roll pic.twitter.com/L613kvHCU0

Faith Hill is known for her country pop hits and bubbly, upbeat tunes that will take your breath away – but in this once-in-a-lifetime performance, she struts out centerstage in a leather jacket, tight-fitting jeans and unleashes a growling performance of Elvis Presley‘s rockabilly hit that nobody ever saw coming!

“It’s insane the charisma he had. I’ve never seen anything like it to this day.”

Performing as part of a tribute concert to honor Elvis, Hill joined other famous artists like Paul McCartney, Miranda Lambert, Toby Keith, Bruce Springsteen, and so many others for Elvis: Viva Las Vegas 2008.

July 24, 1954: Elvis, Scotty Moore and Bill Black, performed at 8p.m. at the Bon Air Club in Memphis Tennessee. They sang "That's All Right" and "Blue Moon Of Kentucky," the only two songs they had recorded. "That's All Right" had been released just days before on July 19th. pic.twitter.com/tTk71LdC5r

“That’s All Right” was first released as the A-Side of his 1954 single that featured “Blue Moon of Kentucky” as the B-Side. The recording was produced as a live-style and featured no drums or other instruments besides a bass and guitars from Elvis and Scotty Moore. This song was cut during Elvis’ fifth visit to the infamous Sun Studios.

Watch Faith Hill’s growling and impressive cover of Elvis Presley’s “That’s All Right” during this incredible tribute concert in the video below!