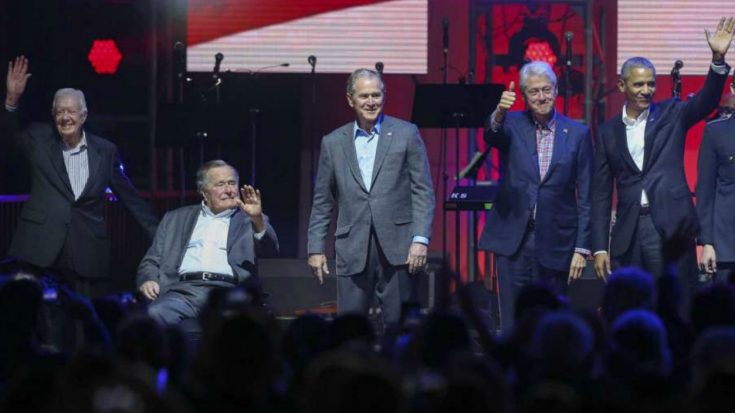 Next to “The Star-Spangled Banner,” Lee Greenwood‘s “God Bless the USA” is arguably the most-recognized patriotic song in America. Written by Greenwood in 1984, the timeless tune has only increased in popularity since the Gulf War in the early ’90s and after the terror attacks of September 11, 2001.

The song’s popularity can be credited to the fact that it speaks only of the pride of living in the United States without regard to political lines, race, or other lines that divide.

On October 21, 2017 Greenwood took the stage at Reed Arena at Texas A&M University in College Station, Texas, to perform his signature song during the Deep From The Heart hurricane relief concert. But unlike the hundreds of times he’s performed it before, there were five former United States Presidents seated in the front row: Jimmy Carter, George H.W. Bush, George W. Bush, Bill Clinton and Barack Obama.

As Greenwood began to sing the well-known lines of “God Bless the USA,” the crowd cheered and clapped then rose to their feet when he sang, “And I gladly stand up next to you and defend her still today. Cause there ain’t no doubt I love this land. God bless the USA.”

The crowd, including the Presidents, heartily sang along to every word. A video captured by a concert attendee shows the emotional moment that the entire crowd stood and began to sing along.

Deep From the Heart: The One America Appeal for Hurricane Relief was organized to help bring much-needed relief to those affected by the catastrophic hurricanes that caused hundreds of billions of dollars in property damage, displaced millions and destroyed entire communities in Texas, Florida, Louisiana, Puerto Rico and the U.S. Virgin Islands.

Watch Lee Greenwood’s performance in full in the video below. And if this video makes you proud to be an American, please share.