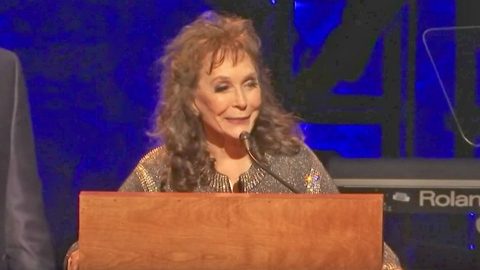 “You’re gonna be one of the greatest singers in country music,” Loretta Lynn recalls telling a nervous young Alan Jackson decades prior to his induction into the Country Music Hall of Fame Sunday (Oct. 22). In addition to the country singer, fellow inductees include late guitarist and singer Jerry Reed and songwriter Don Schlitz.

After suffering a massive stroke back in May, the country music icon returned to the spotlight to participate in the induction of Jackson into the Hall of Fame, the singer now in league with the greatest vocalists in the history country music.

“He hadn’t let me down,” Lynn continued, whom is also a member of the Hall of Fame. With a career like Jackson’s, it really is no wonder Lynn is so proud of him. Later on in the ceremony, George Strait honored Jackson with a touching rendition of “Remember When.”

59-year-old Jackson remains one of the most successful solo artists in the genre, selling nearly 45 million albums in the United States alone and charting 26 singles at the top of Billboard‘s country charts.

With deep southern vocals and talent for storytelling, the Georgia-native was viewed as a breath of fresh air for country music traditionalists when he made his massive breakthrough on country radio with his hit single, “Here in the Real World.”

You can watch Lynn’s moving speech below.