Luke Bryan Confesses What Made His Mom Break Down In Tears 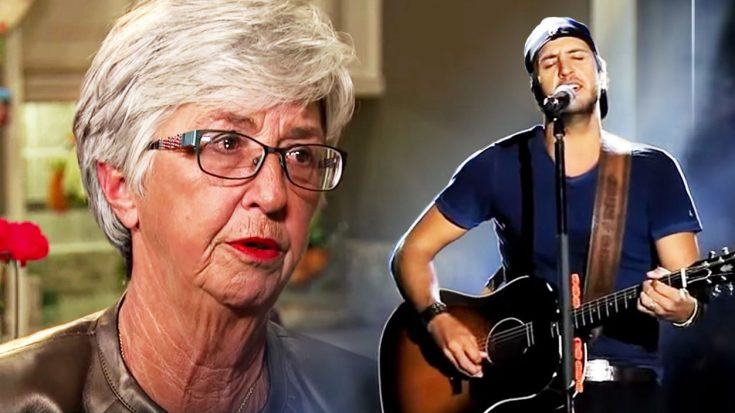 This heart-melting song brought his beloved mother to tears when he played it for her before it was released and, like many other mothers, it may bring some of you to tears as well.

Luke Bryan has been a forerunner in country music for years now, and his story of how he got to Nashville and earned a recording contract is a true miracle – the push to move to Music City coming from his treasured parents.

Now, in just a single line of a song, he melted his mom’s heart with some of the sweetest words a mother could hear. In a special, private session, Bryan shared his latest music project with his mom, LeClaire. She was able to listen to all of the songs he released on his 2017 album, What Makes You Country – long before they were available to the public.

As he explained in an interview with Taste of Country, his song “Most People Are Good” had such an impact on his mom, that it left her in tears.

Likened to his other heart-heavy ballads, “Drink a Beer” and “Fast,” this new somber, sweet song shares his view of humanity and the value of a good person. He felt so moved by the song, too, that he nearly set it to debut as the album’s first single.

Bryan told the media outlet that “It’s one of the best lines I’ve ever heard in a song” – referencing the part of “Most People Are Good” that really hit home for his mom. The lyric in question, “Most mamas ought to qualify for sainthood” brought tears flowing for his own mother, and he watched with deep emotion as she wept into a paper towel while the song continued on.

“That line really hit her like it should hit,” Bryan continued.  “I know my wife should definitely be a saint, putting up with me and my crazy boys.”

The song is a well-written ballad that charters the waters we face as a society and the judgment that is often found riddled throughout the world.

Watch this amazing lyric video for Luke Bryan’s “Most People Are Good” below and let us know how it moves you in the comments.