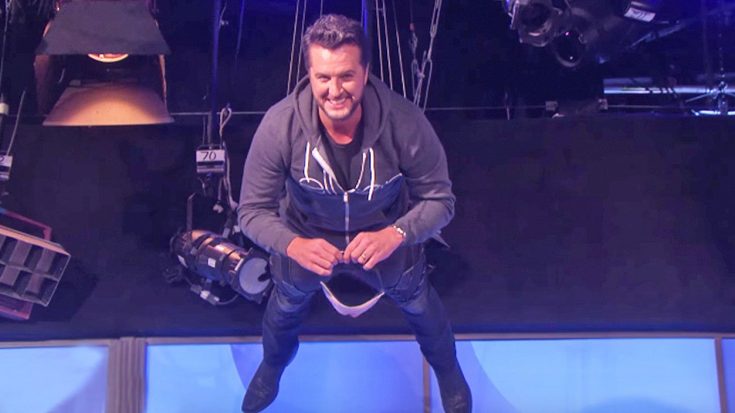 Luke Bryan is always up for a good time, so it’s no wonder he jumped at the chance to participate in one of Ellen DeGeneres’ hilarious new games! Teaming up with fellow guests on the talk show, Mario Lopez and his beautiful wife, Bryan played a fan-favorite game played often on DeGeneres’ show called”Bet Your Wife.”

Bryan and Lopez hung from the ceiling while donning matching eye masks, the women standing by two levers connected to their harnesses. During the game, the talk show host would name off a category and Bryan and Lopez would be challenged with naming off a specific number of items pertaining to each respective category, failure to do so resulting in being dropped closer to the floor.

“Hey Mario,” Bryan joked while he and Lopez hung from the ceiling. “How’s that core strength going right now? This is my longest plank ever.”

In the final round of the game, Bryan was challenged with naming off eight different things that terrify him, hysterically revealing he’s afraid of alpacas. After successfully completing the task, Bryan was named the winner and Lopez was dropped to the floor. However, after explaining they have no other way to get him down, Bryan was also dropped onto his big blue mat.

You can watch the hilarious game below!