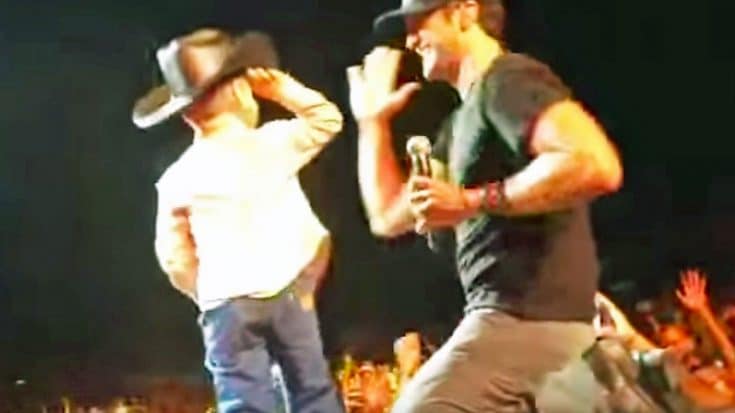 Luke Bryan is known for bringing people on stage during his performances of his hit song “Country Girl (Shake It For Me).” But the guest he chose to bring on stage during a 2013 concert in Tampa, Florida is definitely one of the cutest.

In the video below, the crowd goes wild as Bryan “shakes it” while singing his song. Then, around the 2:54 mark, Bryan spots a little boy with a cowboy hat sitting on someone’s shoulders.

The little boy looked like he was having a good time, so Bryan decided to make his night even better.

Bryan motioned for the person holding the little boy to hand him over, and the two helped lift him on stage. Kneeling down beside him, Bryan handed the microphone over to the boy, who started singing the song.

After Bryan let the boy sing a few more times, he tried to teach him how to “shake it.” Although the little fella had seemed confident when it came to singing singing, he was a little less sure about dancing.

It took Bryan a while to convince the boy to let loose, but when he finally did, it was adorable!

When the two of them finished dancing, Bryan gave the little guy a hug and took a marker from someone in the crowd to sign the back of his shirt. Then, he helped him off the stage and continued the show.

Bryan certainly helped that little boy have an experience he will never forget! Witness the priceless moment by checking out the video below.