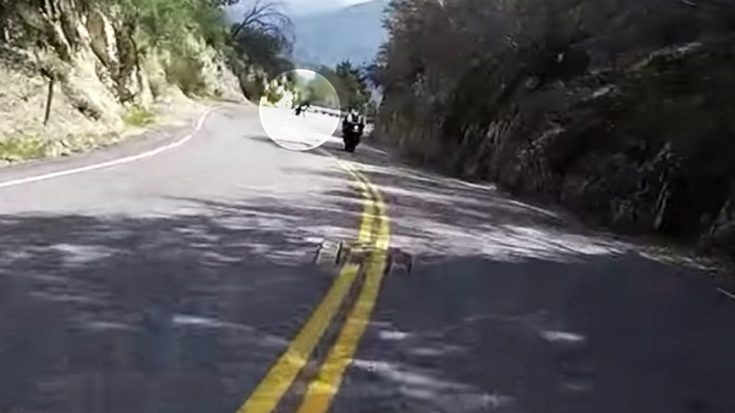 Every year, millions of thrill seekers travel some of the world’s most scenic roads astride motorcycles. Rider David Park is one of those and he documents his rides with the help of a GoPro. Little did he know that his camera would capture footage that would launch him and his friend, Willie, into internet superstardom.

While riding through some canyons with his friends, Park’s camera catches two motorcycles in front of him preparing to take a sharp right turn. One rider glides through the curve while the other, Willie, loses control and drives straight through it. Willie’s bike hits a guardrail and launches the rider over the mountainside and into a tree.

Park pulls over and rushes to the aid of his friend. The sheer terror heard in Park’s voice makes the already dramatic clip even more terrifying. After Park screams Willie’s name into the area he was last seen, Willie can be heard responding with a faint “Yeah.”

Park makes his way down the mountainside where he finds his friend fully responsive, although quite shaken up. Park sits with Willie while awaiting the arrival of emergency responders. Park’s camera captures the arrival of paramedics and Willie’s dramatic helicopter rescue.

In the caption for the video posted on YouTube, Park said, “The rider is one of the luckiest guy in the world to be able to walk away from this with just a fractured shoulder. I’m not sure exactly how he lost control of the bike but the bike got stuck in the tree. Bike still runs after being caught by the tree.”

Park also used the opportunity to warn others of the dangers of riding motorcycles in teh canyons. “Not everyone gets as lucky as this….If you have the need for speed, ride within your comfortable limits and always ride with a friend.”

Watch the jaw-dropping video below.