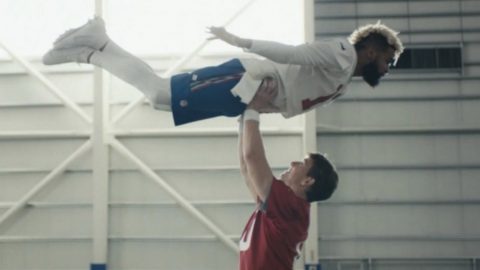 Super Bowl commercials have become as anticipated as the game itself!

During the Super Bowl LII between the New England Patriots and the Philadelphia Eagles, fans were treated to a performance of a different kind when two of football’s biggest stars came together to recreate one of the big screen’s most iconic moments.

The video is set at the Giants’ practice facility and opens with Manning asking Beckham, “Do you want to go work on that thing?” The players make their way to the field and Manning throws a touchdown pass to Beckham. When the receiver makes the catch “(I’ve Had) The Time of My Life” from the 1987 movie Dirty Dancing begins to play.

The tag line at the end of the ad read, “To all the touchdowns to come.”

Check out this epic Super Bowl commercial in the video below!