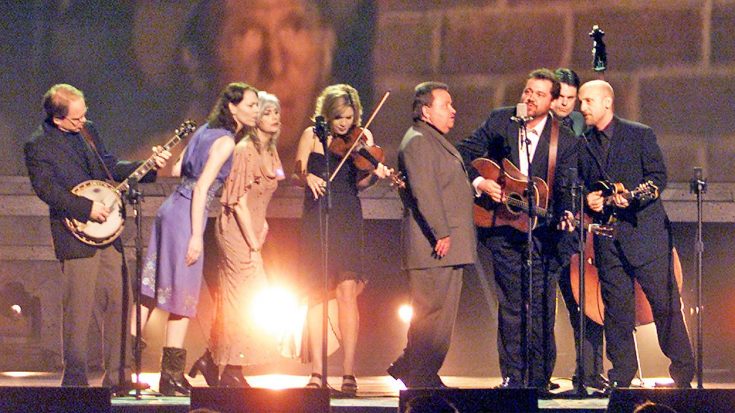 One of the most popular movies of the early 2000s was Joel and Ethan Coen’s adventure film O Brother, Where Art Thou?

Set in rural Mississippi during The Great Depression, the film follows three escaped prisoners who wind up pretending to be the music group The Soggy Bottom Boys and record the song “Man of Constant Sorrow”, which unbeknownst to them, becomes a huge hit.

The film, as well as its soundtrack filled with folk and bluegrass music, immediately became well-loved by fans, and still is almost two decades later. George Clooney’s performance in the film earned him a Golden Globe nomination for Best Actor. The movie itself was also nominated for a Golden Globe for best Motion Picture – Musical or Comedy.

In addition to winning Album of the Year at the Grammys, the songs “Man Of Constant Sorrow” and “O Death” also won Grammy Awards.

At the star-studded awards show, the talented musicians who recorded songs for the soundtrack were given a chance to sing a wonderful medley of three spectacular songs from the movie.

Emmylou Harris, Gillian Welch and Alison Krauss started the performance singing a heavenly three-part harmony to their song “Didn’t Leave Nobody but the Baby.”

They threw it over to bluegrass legend Ralph Stanley, who sang his Grammy Award-winning song “O Death,” which will likely give you chills. The men performing as The Soggy Bottom Boys picked up the pace a little with “Man Of Constant Sorrow.”

If you thought lead singer Dan Tyminski’s voice sounded familiar, you’d be correct! Clooney actually lip syncs in the movie to Tyminski’s voice. Krauss breaks it down on the fiddle during the musical break while Harris and Welch serve up some serious background vocals.

Watch the incredible medley below.