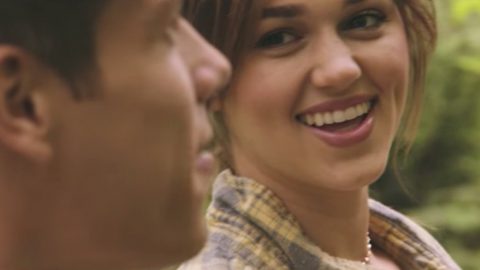 “Past the Past” is Bates’ first radio single from his album What Country Means To Me, and was written by the 25-year old. When it came time to make a video for the song, Bates reached out to several producers in Music City. But, it was Joshua Lockhart who most closely shared the vision Lawson had for “Past the Past.”

“It was important for the treatment of the video to visualize what the song meant to me when I wrote it,” Bates told Country Rebel. “I wanted the audience to be able to relate.”

The video, shot at a high school in Manchester, Tennessee, features Sadie in the role of Lawson’s girlfriend and tells the story of high school sweethearts who are torn apart when the boy chooses a future with football over a future with the girl.

One would never know by watching the music video that Lawson and Sadie had only met two days prior to the start of filming.

“I didn’t know who to ask to be the actress in the video,” Bates told Country Rebel. “A mutual friend recommended Sadie and gave me her phone number. I cold-texted her and asked if she would be a part of this video. She said she would be glad to.”

The pair met for the first time less than 48 hours before filming started. Their connection was immediate, something Lawson credits to Sadie’s friendly personality.

“Sadie has such an outgoing personality. You feel like you’ve been friends with her your whole life,” Lawson said. “Another reason we clicked was because we connected on such a personal level. The song was a heartbreak song and we were both getting over something, dealing with things in our personal lives. We use what was going on in our own lives to capture the emotion in the song.”

While Lawson and Sadie’s performances in the video went off without a hitch, the making of the video wasn’t without some drama. According to Bates, the video was set to film on a very tight schedule. In addition to Sadie’s guest appearance, many members of the Manchester, Tennessee, community were involved, including the Coffee County High School football team and various other extras, so an unexpected thunderstorm threatened to ruin filming plans.

“The football coach said, ‘We’re gonna have to call this off. I can’t have my players getting sick,'” Bates said. “In the end, the rain actually turned out to be a blessing in disguise because it added to the drama of the video.”

Unlike most music videos, Lawson’s was being filmed by two separate film crews. Behind-the-scenes footage was being captured for his family’s television show Bringing Up Bates in addition to the hired video crew getting all the shots they needed for the music video itself.

The final result was a video Lawson Bates and his team can be proud of and that country music fans will enjoy watching for years to come.

To hear more music from Lawson Bates, click here. You can also follow him on social media here.

Check out Lawson Bates and Sadie Robertson in the official music video for “Past the Past” below.