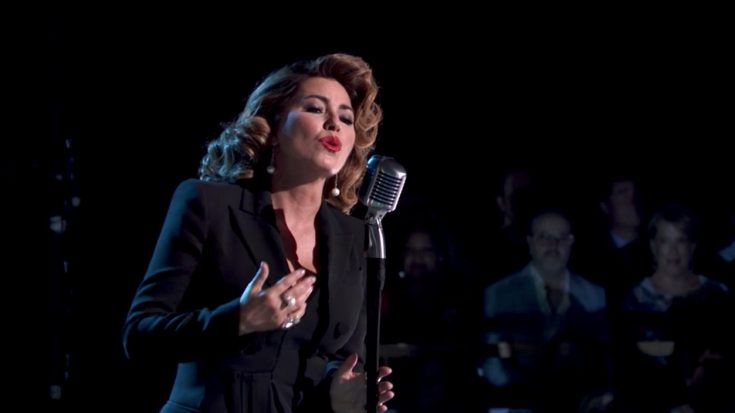 Shania Twain appeared as a guest judge and performer on Monday night’s episode of Dancing with the Stars. The country music superstar joined the dancing competition show for its Movie Night, a tribute to iconic dance moments from throughout movie history.

Twain did a great job in the judge’s seat, but silence the packed house when she took her turn on the dance floor to since her new song “Soldier.” The song is featured on her new album Now and also appears in the movie titled Thank You For Your Service.

As Twain stood on a podium in the center of the dance floor, four couples danced around her. Donning a look reminiscent of the ’40s, Twain belted out the emotional ballad about the sacrifice of service members and their families. The song also speaks of the challenges soldiers face after returning home from a tour of duty.

“I cried so much when I wrote this song,” Twain shared on Instagram. “I wrote it over a matter of weeks. Every time I would go back to writing the song I would just cry. I had to take breaks. I was very emotional…the fear of losing someone you love so much.”

I wrote Soldier over a matter of weeks. #ShaniaNOW

Watch Shania Twain perform “Soldier” on Dancing with the Stars in the video below.