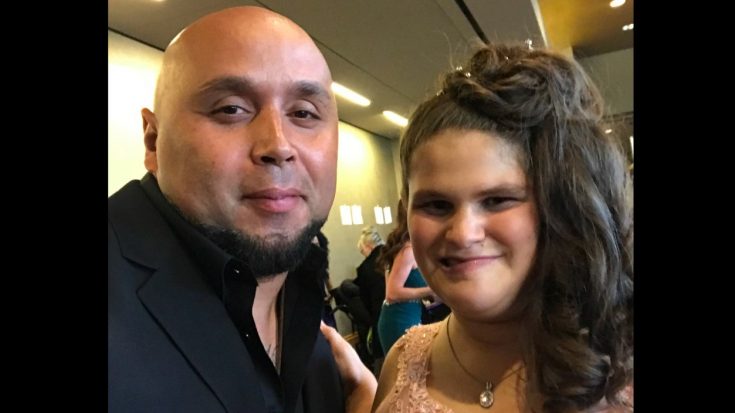 It’s been a busy 10 months for Kris Jones who became the first viral superstar of 2017 with his cover of “Tennessee Whiskey.” Since finding himself a household name, thanks to his viral video and an appearance on The Ellen Show, Jones has garnered an impressive social media following and the title of America’s Favorite Singing Dad.

Jones has used his new-found fame to help others, especially in his home state of Texas where the Alvarado native has performed at benefit events throughout the state. Most recently, Jones became involved in the Night of Superstars, an “Oscar-like charity event that draws numbers of local celebrities and high-profile personalities, mass media attention and hundreds of guests; all to celebrate the accomplishments of 20 of the most amazing kids in the area who are affected by varying types of disabling conditions.”

During the 2017 Night of Superstars held Saturday (October 21), Jones was one of the celebrities chosen to walk one the events Superstars down the red carpet. Held at the Omni Hotel in Dallas, this year’s red carpet banquet moved Jones unlike any other event he’s ever been a part of.

“My date was named Alyssa Phillips and she has cerebral palsy. Getting to meet her and walk her down the red carpet was unlike anything I’ve ever experienced before,” Jones told Country Rebel. “When we first met I asked her how I could make this night special for her. She said that if I had fun then she’d have fun.”

One of the highlights of the even was as each Superstar took their turn speaking to the crowd and sharing their stories. “They weren’t sad at all. They were excited to tell their stories and to help other people,” Jones said. “I was moved to tears.”

Jones also served as the entertainment for the event. He took the stage following the Superstars’ speeches to perform the Grammy Award-winning R. Kelly hit “I Believe I Can Fly.”

A video from the event captured Jones’ performance and the moving response from the crowd. As Jones began to sing, people came to their feet, hands in the air, as they sang along. Many of the night’s Superstars made their way to the front of the stage where they swayed and danced along.

As Kris Jones prepared to leave the event, he made his way to Alyssa to say goodbye. She promptly reminded him that he couldn’t leave yet because he had promised her a dance. The two made their way to the floor and the joy is evident on Alyssa’s face as they danced along to “Gonna Make You Sweat (Everybody Dance Now).”

“I had no idea that events like this existed and I was honored to be a part of it,” Kris said. It’s important to Jones that attention is brought to the Alyssa V. Phillips Foundation, a foundation started by Alyssa’s parents to support individuals with Cerebral Palsy with a focus on assisting children with CP, the families of children with CP, or any individual impacted by CP in maximizing independence.

To learn more about the Alyssa V. Phillips Foundation or to donate, please click here.

Watch Kris Jones’ performance of “I Believe I Can Fly” in the video below.