Simon Told Her To Stop Singing, So She Proved Him Wrong With A Different Song 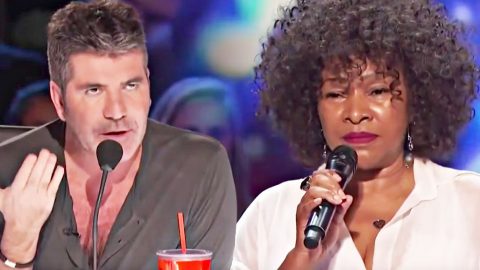 This 62-year-old has been singing for most of her life and nothing could make her give up on her dreams – not even when Simon Cowell stopped the music in the middle of her audition.

Taking the stage for 2016’s America’s Got Talent season, Ronee Martin, appeared in front of all four judges with a beaming smile and positively upbeat spirit. Martin, who is a legal assistant when off stage, explained that she wasn’t someone to easily give up on her dreams and had once been just inches away from a record deal before it fell through.

Already impressing the judges with her stunning personality, Martin began her audition by singing a beloved classic made famous by Bonnie Raitt, “I Can’t Make You Love Me”.

As she sang through the first verse, her tone and pitch were great, but there was something missing for the judges. This is the exact point when Simon Cowell held up his hand and stopped the music. Martin quit singing abruptly before Simon spoke about why he wanted her to stop.

“Ronnie,” He said addressing her. “I don’t think that song was right for you. What else have you got?”

The other three judges looked on nervously as the exchange happened with this singer and one of the judges known to be most critical.

“I have, um, ‘Natural Woman’,” She said slightly shaken.

Simon seemed to think this would be an appropriate choice, so he agreed and cued the music back up. Although the beginning of her audition hadn’t gone exactly the way she had hoped, Martin wasn’t going to let anything stand in her way this time – and she unleashed a furious performance that brought a giant grin to all the judge’s faces.

At the end of her dazzling second song, each judge praised her and exclaimed just how magical the second song was and thanked her for choosing it instead of continuing with her first choice.

Watch Ronnie Martin’s America’s Got Talent audition in the video below and you’re sure to be just as surprised as Simon!