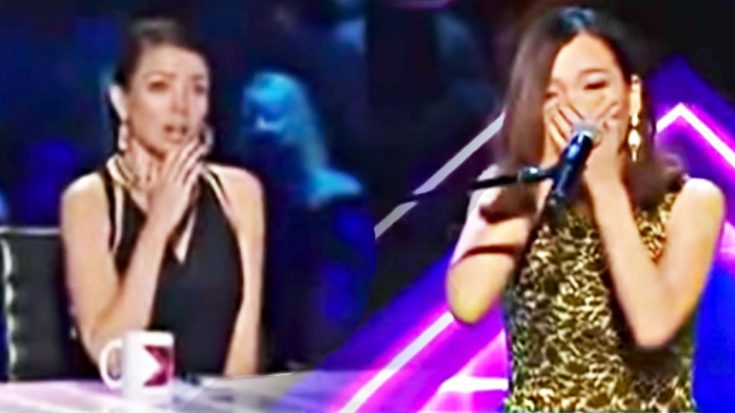 In front of more than 1,000 people and three celebrity judges, this shy girl began singing Dolly Parton‘s classic hit, “Jolene”, but moving into the second verse something happened that caught everyone off guard.

Dami Im is an Australian singer-songwriter who first auditioned for the X Factor Australia in 2013. She had made it past the first round of auditions when she officially went into the bootcamp section of the show. It was here where she would have to perform three more auditions and pass the judge’s inspection before she could make it into the main show.

Sitting center stage with her piano (and for the first time in front of a massive audience), Im began pouring her heart and soul out into a cover of Dolly Parton’s legendary “Jolene”. She sounded incredible and you could see how much the judges were enjoying the performance.

Gliding right into the second verse, Im stumbled over the lyrics, gasping loudly into the microphone and a look of terror washed over her. The judges, who already knew how talented she was were also shocked at this minor flub. Just a brief second later, she continued playing and began singing, this time pulling all the lyrics into her performance.

While many people may think that this is a sign of someone who isn’t quite ready for center stage, the fact that she didn’t give up and had a “show must go on” attitude truly reflects on her abilities as a musician.

By the end of her performance, the audience and judges had given her a standing ovation that left her in tears!

Dami Im went on to compete in the live shows and won that season of X Factor Australia! It’s a great lesson in never giving up because there isn’t a person out there that hasn’t hit a bump in the road.

Watch Dami Im’s incredible performance below and let us know what you think in the comments.