Remember When This Dad Blew Up The Internet With His Incredible Cover Of ‘Tennessee Whiskey’? 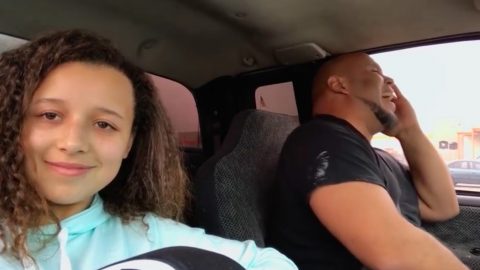 In 2015, Chris Stapleton‘s career skyrocketed after winning nearly every major award at the CMA Awards and delivering a jaw-dropping performance of the George Jones classic, “Tennessee Whiskey.” Within two days, Stapleton’s cover sat atop the Billboard country charts. Within five months, Stapleton’s rendition was certified platinum.

Ever since Chris Stapleton introduced a new generation to the classic, many have covered the tune. But, we dare say that none have done it as well as Kris Jones, an unsuspecting dad who was caught on tape by his 15-year old daughter.

In the video posted to Facebook in January 2017, Jones sits behind the wheel of his truck while his daughter occupies the passenger seat. As the camera starts rolling Jones starts singing, and it’s unlike anything we’ve ever heard before. The dad’s smooth, soulful voice escalates as the song progresses. The only thing better than his voice is his daughter’s obvious delight with hearing her dad sing.

The viral video caught the attention of Ellen DeGeneres who invited the father-daughter duo to be guests on her talk show. During the visit, Kris revealed that he had long hoped for a music career but that “life happened.”

“I had these kids. My babies needed braces. So, I went to work,” Jones told Ellen.

He also revealed that he had auditioned for American Idol and The Voice years before, but was ultimately rejected by both.

“The Voice came to Dallas. I tried out for The Voice. I remember being out there…thousands of people with all of these beautiful voices around me,” Kris recalled. “I was one of the last groups that went in. It was crazy because I walked in there…I opened my mouth and about seven words came out, and they were like ‘Nope.'”

In a strange turn of events, The Voice reached out to Jones after his “Tennessee Whiskey” video went viral and offered him an audition. He was set to be a part of the season 13 cast, but turned the opportunity down due to family obligations. But, the decision hasn’t hurt Jones who has since garnered a following of more than 500,000 fans on Facebook, signed a record deal and released his debut self-titled EP.

To date, the Kris Jones’s flawless cover of “Tennessee Whiskey” has been viewed roughly 70 million times, making Jones one of the biggest viral stars in recent years.

Watch Kris Jones sing “Tennessee Whiskey” in the video below. Then check out his Facebook fan page to see more by clicking here.