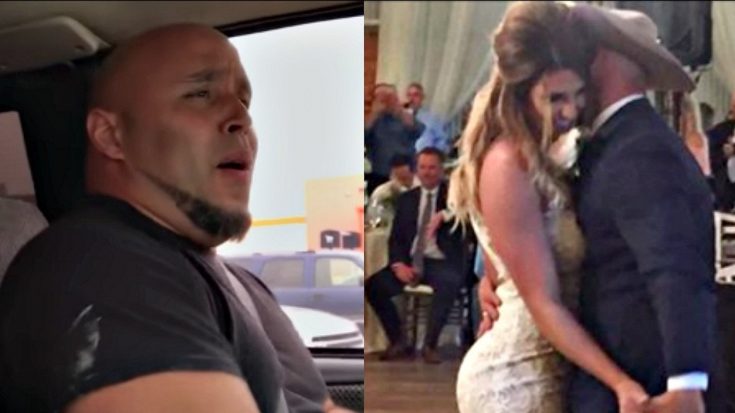 It’s been nearly four months since Kris Jones‘s life was changed by a video taken by his daughter. The hard-working dad was recorded by his 15-year old daughter, Dayla, as he sang the George Jones/Chris Stapleton hit “Tennessee Whiskey.” Jones’ wife posted the video online and, as they say, the rest is history.

Tens of millions of views later, Jones finally got the break he’d been dreaming of since he was a kid. The married dad of three from Alvarado, Texas, was invited to perform on The Ellen Show after one of the show’s producers saw the viral video.

Big things have continued to happen for Jones in the months since his Ellen Show appearance. Not only has he appeared on numerous radio show and performed at venues across the country, but he has had the opportunity to be a part of some of his fans’ life-changing moments.

One such moment occurred in early April when a Houston-area man asked Jones to surprise his daughter with a performance of “Tennessee Whiskey” during her wedding reception. The bride, Savannah, is a huge fan of Jones’s and her dad wanted to surprise her with a moment she would never forget.

The surprise was captured by a wedding guest who recently posted the video to YouTube. In the clip a DJ can be heard starting the music for ‘Tennessee Whiskey.” But, only a few bars in he announces that it’s the wrong music.

“Actually, that isn’t the correct track, ladies and gentlemen. It’s a special surprise for Savannah, we have live and in-person, Mr. Kris Jones performing this song for the bride and groom,” the DJ announces.

The bride is obviously shocked and delighted by the surprise as Jones makes his way to the microphone.