Texan Yanks ‘Worst Nightmare’ Snake From Inside His Toilet

By Manly Bryant on January 8, 2018
Advertisement 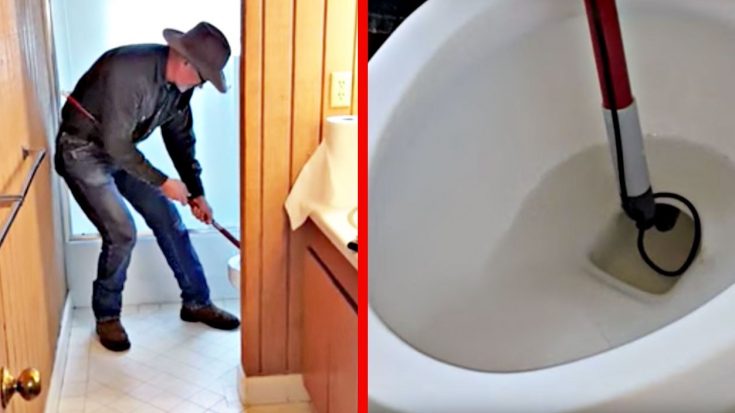 You won’t be sitting down on a toilet without looking under the lid anytime soon after watching this video William Tedrick shared recently – but, moreover, you’ll be prepared for what “nightmarish” creature you could find and it’s all thanks to Tedrick’s video.

According to several reports, Tedrick explained that he was cleaning out a home on his property when something in the toilet caught his eye. A common rat snake had somehow finagled its way into the home’s plumbing and was lurking about in the toilet piping.

With its head sticking out above the water level, Tedrick had an ingenious idea that he made sure to capture on video. Using the handle of a mop rigged up with a noose-like rope end, Tedrick placed it ever so carefully into the toiled bowl and waited for the snake’s return.

LOO SHOCK: Snake catchers were called to this sticky situation in Brisbane's east after a family discovered a carpet python inside their toilet early this morning.
Credit: Brisbane Snake Catchers. Details TONIGHT at 6.00pm. #9News pic.twitter.com/6VwAn1pgnW

After a miss or two, Tedrick eventually snagged the serpent, but he wasn’t going to leave the toilet without putting up a fight.

“I had him out about three feet when he coiled up again and he pulled me forward,” Tedrick told the Bryan-College Station Eagle. “I was afraid his head was going to pop off, but he was perfectly okay.”

Winning the fight was only half the battle as Tedrick pulled the snake out of the toilet and walked through the home. Folks watching squealed as he brushed past them with the snake. Next, he properly disposed of the snake by returning it to the wild and explained exactly how to do that in the video.

Surely Tedrick and whoever sees this video will always check under the toilet seat before sitting down!