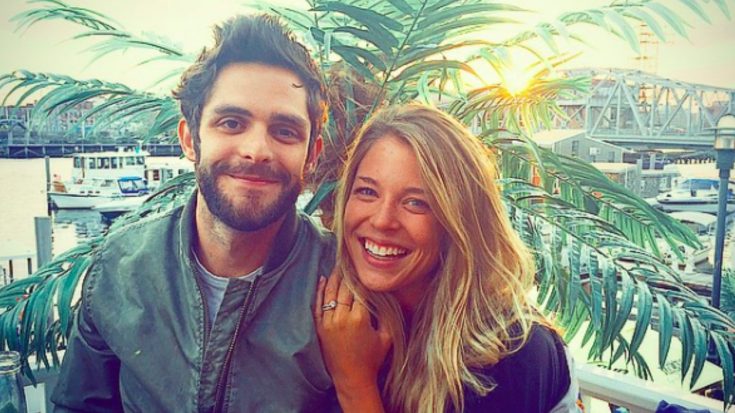 With one love letter to his wife, Thomas Rhett‘s career took a huge turn.

“I really did just wake up one day and was like, ‘I have yet to write a song about her.’ That’s just one of those cheesy things you do for your girlfriend when you’re 16, but I decided to do it when I was 25,” Thomas Rhett said of his hit song “Die a Happy Man.

Rhett wrote the song for his wife Lauren whom he’s known since 1st grade. At 13, they attended church camp together and briefly dated at 15. In their late teens, the two got into serious relationships with other people. “I almost married someone else, and she did too,” said Rhett in a recent interview with CBS This Morning

Lauren ended her relationship allowing Rhett to make a move.

“We kissed, and that was it. We dated for probably six months, and we got engaged,” he said.

Four years ago, at age 22, the couple married.

“Everybody was telling us not to … but we just fell in love at a young age,” he says. “The first year she was on the bus with me 285 days, sharing a bunk, which is smaller than a twin bed. It’s been five years on the road now.”

A lot has happened since the young couple wed. Rhett now has six No. 1s under his belt as well as a CMA Award for Single of the Year for “Die a Happy Man,” the tune he penned for his wife. Lauren also starred alongside Rhett in the music video for the song. Ironically, the video was shot in Oahu where the couple honeymooned a few years prior.

Everything about the video is real, Rhett told PEOPLE. “We love to let people in on our lives and be an example of what it means to be in love,” he told CBS. To date, the video has nearly 85 million views. Check it out below!