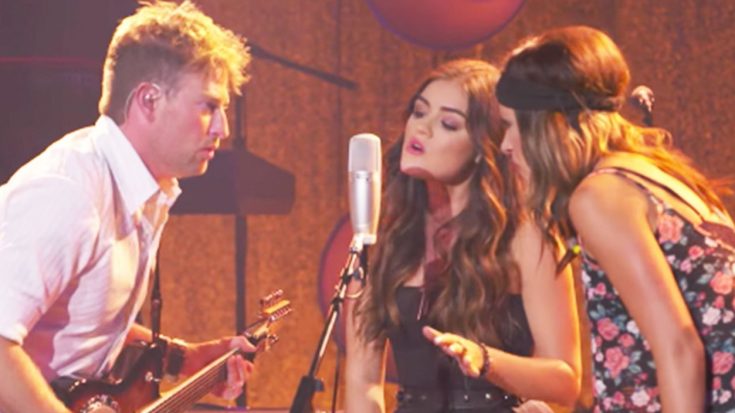 You may know Lucy Hale from starring as Aria Montgomery in the hit teen drama Pretty Little Liars, but did you know she actually got her start on the 2003 American Idol spin-off American Juniors?

She was one of the five finalists who formed the pop band using the same name as the television show. After two years, and two albums, the group disbanded with Hale putting music to the side and taking the acting route.

Many years later, she was given the opportunity to focus on music once again and released her debut solo album, Road Between, in 2014. The 11 tracks were written by well-known Nashville songwriters including Ashley Gorley, Luke Laird, Hillary Lindsey, Chris DeStefano, Kacey Musgraves, and Lucie Silvas.

At her album release party at the iHeartRadio Theater in Los Angeles, Hale performed a few songs from Road Between, as well as one very special cover of Dolly Parton’s iconic song “Jolene.”

It was nominated for two Grammy Award in the 70s, but she didn’t win one for this particular song until 2017, when her version with the a cappella band Pentatonix took home the coveted award.

Hale, along with her banjo player Scotty Alexandre and backup singer Carly Pearce, delivered beautiful three-part harmonies for the chorus, and during the verse, she proved why she won that singing competition so many years ago.

While no cover can really compare to Parton’s classic original, this performance is one of the better ones we’ve seen! Watch Hale perform “Jolene” below.