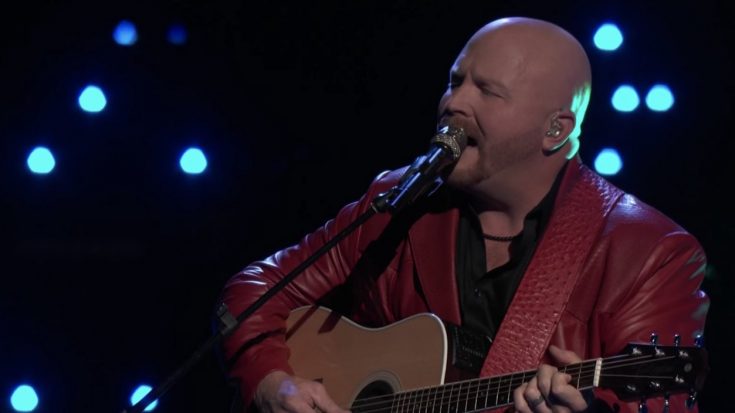 Red Marlow, the last male left standing and the most country voice in the Season 13 Voice finals, showed Monday night that he isn’t going down without a fight.

Marlow is one of four finalists on vying for the coveted Voice title and he made the finals thanks to the public’s vote last week. The Team Blake singer has been considered an underdog most of the season, but has consistently delivered solid country performances that have kept him alive.

The demo singer turned construction worker kicked off the season with his take on John Anderson’s hit song “Swingin’.” He has continued to win us over week after week with performances of country hits such as Shenandoah’s “Church on Cumberland Road,” “Outskirts of Heaven” by Craig Campbell, the Nitty Gritty Dirt Band’s “Fishin’ In The Dark,” and “The Dance” by Garth Brooks.

On Monday night Marlow revisited another Garth song when he chose to take on “Make You Feel My Love.” The song, written and recorded by Bob Dylan, was made popular by Brooks when it was included on the soundtrack for 1998 film “Hope Floats” starring Sandra Bullock and Harry Connick Jr.

Marlow pulled out all the stops with his performance and delivered a flawless cover of the popular tune. Accompanied only by his guitar, the singer’s vocals stood front and center and proved that he deserves to be in the finals.

Marlow is one of two Team Blake contestants vying for the title. He is also the oldest finalist, something that makes him feel as if he has already won, regardless of the outcome.

“I think Blake definitely knows me,” Marlow said. “I’m 40 years old. He needs to push Chloe as hard as he can. Chloe is very young and she can be a superstar. There are different ways Blake can help me. It’s not that I don’t want to win because I’d love to win, but I want to see the best person win. I feel like being as young as they are, they have such a huge future ahead of them.”

Marlow added, “I’ll be just as happy for any one of those girls to win, in fact, I’ll be happier because I know how it’s going to change their lives. I’m already a winner at this point. I’m just blessed and so happy to be here.”

Hear Red Marlow sing “Make You Feel My Love” in the video below. Tune into NBC Tuesday night at 9 p.m. ET/PT for the two-hour live finale and see the Season 13 champion crowned.