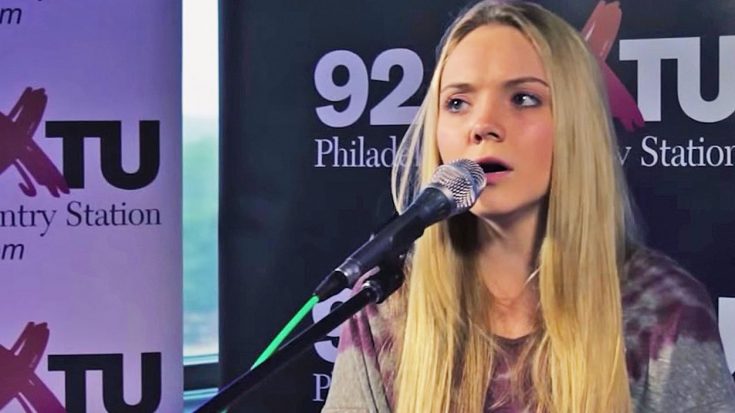 Danielle Bradbery was just a month shy of turning 17 years old when she won The Voice in June 2013. She captivated viewers with her stunning covers of beloved country hits, including Carrie Underwood‘s “Jesus, Take the Wheel.”

After turning three chairs in the blind auditions and winning her battle round, Bradbery faced off against Taylor Beckham in the knockout rounds. That’s when she performed Underwood’s debut hit, which saved her spot on her coach Blake Shelton‘s team.

Shelton managed to take Bradbery all the way to the end of the competition. She continued to amaze with new covers each week, including another one of Underwood’s songs called “Wasted.”

If you thought Bradbery’s knockout performance of “Jesus, Take the Wheel” was stunning, just wait until you hear her perform it acoustically. A month after taking home the winning title, Bradbery stopped by to visit 92.5 XTU in Philadelphia.

Bradbery sang a few songs during her visit, including an acoustic version of “Jesus, Take the Wheel.” With only two guitarists to back her up, the raw beauty of Bradbery’s voice was able to shine through brighter than ever.

Everyone knows that Underwood has a powerful voice capable of hitting notes that are way up there. Well Bradbery proved with this performance that her voice has that same sense of power, as she hit the high notes in the song with ease.

But no words could ever do this performance of Bradbery’s justice. Watch her radiate talent as she sings “Jesus, Take the Wheel” below.